Obama is Owned By US Assistant Attorney General Patrick Fitzgerald 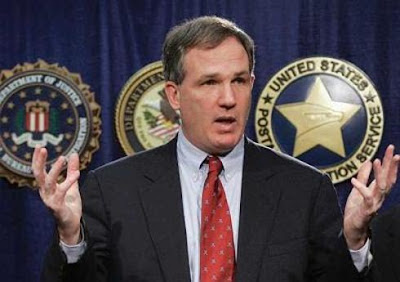 Chicago, IL- As former Illinois Governor Rod Blagovejich is being tried for political corruption involved with Barack Obama’s former senate seat Pat Fitzgerald is doing fancy footwork protecting the man that held him over in his job as top Northern Illinois federal prosecutor.

Fitzgerald would have been tossed with the rest of the Bush political trash except that he owned Obama though wiretapped phone conversations. Fitzgerald holds the keys to the Whitehouse and Obama has no choice but to give the crafty Fitzgerald anything he wants. I’d love to see Fitzgerald’s Swiss bank account balance right about now.

Fitzgerald’s arrest of Blagovejich and prosecution has seen the cover-up of evidence because only select portions of the intercepted phone calls were released in the court discovery routine process. Of course there would be a potential fat reward for any federal judge that would protect the man who could appoint him to a higher judicial office. It’s doubtful that the covered up conversations will ever see the light of day under these circumstances.

There are those that believe that Fitzgerald timed the arrest of Blagovejich early enough to insulate Obama from getting snagged into the conspiracy. That cover-up gave Fitzgerald whatever he wanted including being able to continue on inside the Obama Justice department.

Blagovejich was counting on his own knowledge of Obama’s criminal activity to provide him with protection too. Perhaps an end to the prosecution or at least a pardon in exchange for protecting Obama is in order. The same people that endorsed Boagovejich as Governor now claim he's crazy.

Blagovejich should have come clean on this mess long and snitched off Obama long ago. Now we have to hope that his defense team can artfully expose what the prosecutor and judge desperately wants to keep under wraps, Obama’s involvement in the conspiracy. Are we going to pretend that Obama was not trying to get that key senate appointment for a loyal and trusted comrade?

Blagovejich was supposed to have a Fifth Amendment right to summon witnesses for his defense. That right was violated by Judge James Zagel who won’t allow Obama to be subpoenaed by the defense.

Obama has a lot to hide and has all the help doing so that the Obama Justice department can provide.
Posted by Paul Huebl Crimefile News at 6/09/2010 09:40:00 AM

Hey Paul even before Obama got in Fitzgerald and his U S Attorney's office in Chicago and the FBI knew about an off duty incident on the Westside involving off duty CPD and their homeboy Vice Lord friends and some dope dealers. Seems there was a homicide by off duty P.O.and his Vice Lord friend, they gunned down a rival dope dealer on Madison Ave., that was covered up because of P.O.'s "clout" and the U S Attorney and FBI have all the proof and info and failed to do anything about it. So Fitzgerald is just another rat lawyer taking care of himself.

Where is the Birth Certificate??