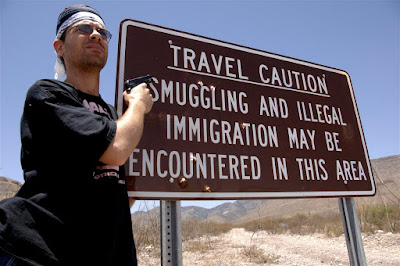 Phoenix, AZ—I don’t care where you stand on the issue of criminal immigration. It’s understandable why people want to live in America. The reason people want to come here is because of all the things Barack Obama and his Socialist Gang wants to change like the free market, liberty and freedom.

Those One World Socialists want the entire globe under their rule. One World is another way of saying, there is no escape. Socialist countries have border security, not to keep people out but to prevent people from fleeing their oppression. With a one World Socialist government borders would become totally irrelevant.

American taxpayers can’t continue to provide free schooling and medical care for all of South and Central America like we’ve been doing. That failed policy has bankrupted us and damaged our way of life. Those countries and their corrupt governments have exported only poverty, drugs and violence to our heartland.

Terrorists know the American political climate has destroyed our border defense and that they can move all manner of weapons of mass destruction along with agents to place and detonate them. Dirty bombs, chemicals to poison our food or water supplies along with their delivery systems are easily transported across our border.

Only a fool would believe that terrorists did not change their method of attack from commercial air travel attacks to other means. Our own Whitehouse has been occupied by our enemies for more than a year. We are under the most serious attack this nation has ever faced. The enemy is in absolute controls our borders.

Arizona Governor Jan Brewer asked Barack Obama for border security and instead got a flag of surrender. Signs posted by our federal government acknowledging the acceptance of the invasion warning Americans to stay away.

Sitting here in nanny-state Singapore and watching a BBC special on the upheavals in Thailand while also thinking about my return home next week to Arizona and what's happening there, I think I can see the two poles of what the next couple of years could bring.

Singapore is clean, well groomed and peaceful. It feels like a graveyard because there's little life other than what is cultured, clipped and pruned.

I'm not one for utter chaos but, then again, there's a lot to be said for fecundity. Some of the best species I know came from it.

Jan said that her pleas for help to Napolitano and Obama are ignored??? Listen to her own words.
http://www.youtube.com/watch?v=EC6TGqNW7u4&feature=related

Just goes to show the Department of Homeland Security is a farce.

George Soros has told the world his vision for a "world government" in his book "GLOBALIZATION". SDR's (special drawing rights) will be the next ponzi scheme and further consolidate power. But most important, have you all read Obama's Manifesto? He clearly tells us he wants an international order. Read it for yourselves, especially pg 12 about international laws.

Obama clearly is pursuing daddy Bush's "New World Order" and for such should be immediately relieved of his position.

Obama embraces the notion that America's Constitution must be tossed aside and sovereignty of all nations made irrelevant.

Hello Mr. Mueller, aren't you going to do something?