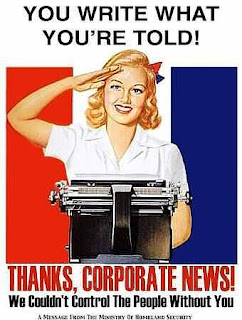 Chicago, IL—While growing up in the Windy City I noticed that our top four Newspapers (Yes, there were four) used their power to influence elections. I felt this was a conflict of interest since they also reported on political scandals. They problem was that they only gave negative press to candidates they did not agree with.

Mayor Richard J. Daley was nothing like his pathetic and worthless son, Richard M. Daley who reigns over Chicago courtesy of his entitlement addicted majority.

The elder Daley was a fiscal conservative that was somewhat pro-labor. Old man Daley was satisfied with taxing less and keeping the job market lucrative for all those who wanted to work. The City of Chicago was once a great place to live, work and raise children.

The newspapers did not like the Conservative Daley and on Election Day, provided newspaper, voter’s guides that would dictate the politically correct candidates to vote for. Of course all four newspapers supported anyone running on a platform further Left that the regular Democratic Party. Their loyal followers would blindly bring their newsprint voter’s guides right into the voting booths and follow those instructions.

Slowly over the decades that destroyed the Regular Democratic Party and today you have the party of the Daley/Burke/Obama Crime Families. The new party principals were right out of Karl Marx’s teachings.

America’s large single voiced newspapers have brought us straight to Hell with Barack Obama and his thugs.

Television news as brought to us by the Big Three Networks closely followed with politically correct Leftist broadcasts in lockstep with the newspapers.

Talk radio and the Internet brought fairness and democracy to the way American’s get their information. The public is rapidly learning that they have been had and that the old trusted sources of information were nothing more than Leftist propaganda machines. Reader and viewers have abandoned their traditional and politically skewed media for the Internet.

Having a seemingly endless range of internet media sources Americans are no longer the captive audience of the old Leftist main stream.

Now Leftist politicians want to bail out the troubled Marxist indoctrination publications and broadcast operations with tax money. They hate voters having too much information that the Internet now provides.

Our Leftist politicians have a cure for a runaway Internet. That is to tax it to death. They are inventing similar schemes for cable TV and radio. They want to destroy the freedom of speech.

It’s far better that we have dead Leftist politicians than a dead First Amendment!
Posted by Paul Huebl Crimefile News at 6/08/2010 10:18:00 AM

You've got it so right! We need to eliminate our Communist and Socialist politicians, not free speech!

Paul, have you lost your mind ?

“The elder Daley was a fiscal conservative that was somewhat pro-labor. Old man Daley was satisfied with taxing less and keeping the job market lucrative for all those who wanted to work.”

The elder Daley presided over a program that wrecked the business climate in Chicago in the 1960’s and 70’s. His high property taxes, fees, the corporate head tax and cozy relationship the most corrupt labor unions on the planet drove thousands of jobs out of the city to more friendly locals. In the 1970’s vast sections of the city were abandoned as the city rotted into a massive ghetto and white people took flight all because of elder Daley. The city recovered again in the 1990’s because businesses fled New York City to Chicago. They came because New York was run even worse and Chicago had super cheap commercial real estate.

In the late 60’s and early 70’s the elder Daley pushed a massive commercial real estate building program downtown to keep his pals in the trades working. He strong armed what was left of the cities business community to finance the deal that initially was a huge failure. Those building stayed predominately empty for a decade until the businesses fleeing from New York discovered them at bargain basement prices. The propaganda media love to honor the old man as some sort of visionary who saved the economy of Chicago with his push for those buildings but the truth is it was all just blind luck. No one could have anticipated that New York would cut their own throats the way they did.

And now his son is destroying the present business climate the same way his father did, with outrageous taxes and strong-arm tactics on business leaders. Chicago is turning back into the ghetto it was in the 1970’s and the white population is about to abandon it as they did before.

The only positive thing that can be said of the elder Daley is that he wasn’t as greedy as his son. Sure we all feel nostalgic for the old days when they would only steal a little bit from you and the city wasn’t out to screw you for every dime. But the midget King Daley II learned his trade from daddy, make no mistake about that.