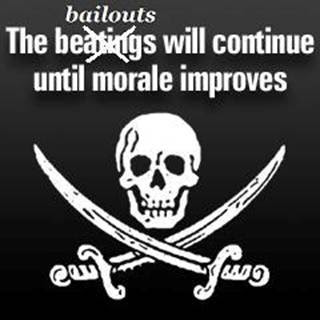 Washington, DC—Barack Obama is at it again, enslaving taxpayers this time for yet another $50 billion to bailout cities that refused to exercise minimal fiscal discipline.

Now these Democratic Party controlled cities say they have to lay off teachers, fire and police. Of course the unbridled corruption and waste matters not as the same city officials will get another blood money bailout.

The Leftists running these metropolitan cesspools have done silly things like declare themselves as Sanctuary Cities for illegal aliens. They’ve forcing taxpayers to provide services for the trespassers.

Chicago for example misspent many tens of millions trying to win the Olympic Games. They were merely looking for more contract extortion opportunities for their own officials.

Is there no limit to bailout foolishness? These rogue cities need to be forced to tighten their belts. They need to be weaned from reckless spending. Giving money to the same horrible local politicians that created this mess is the same as rewarding John Dillinger for robbing banks.

Cities must be allowed to fail. The residents of these cities would then vote out the crooks that created the problem in the first place.

Congress needs to get the message whether it be accomplished with ballots or bullets, NO MORE BAILOUTS!
Posted by Paul Huebl Crimefile News at 6/13/2010 09:29:00 AM

Crookago is no doubt the poorest run City in the U.S. Nothing but wasted Millions thanks to Clown-King Shortshanks Daley and his crime cabal of corrupt political chronies.

I agree Paul except for one thing. I've been a Policeman in Chicago for 30 years. I've served my city well and gave it 110 percent everyday. I've worked midnites, afternoons and holidays. I have had to miss many family events because of my job. I taken a few bullets over the years while giving some back. I still have some fragments inside of me. Now I'm very close to pulling the pin. And we both know that if the Fed cut's off funding, the City will not tighten it's belt. The City will fire every policeman or fireman before they cut one single entitlement program.

Lay off every cop? That’s an exaggeration for sure! At a minimum the city would quadruple the amount of cops protecting the Daley/Burke Crime Families and their offices.