Brady Campaign Is On The Ropes 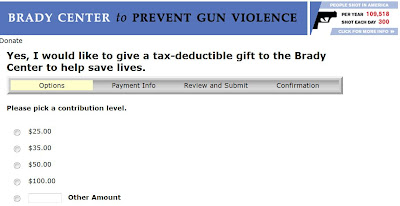 They’ve changed their name many times but their mission is the same. They want what they’ve called sensible gun control. They’ve wanted to ban every gun in civilian homes in America. They’ve pushed their agenda with a loud voice for a couple of decades but now thankfully, they’re running out of gas.

The U.S. Supreme Court dealt them a fatal blow when they re-affirmed the Second Amendment in the Heller case. Now the Brady Bunch is bracing for another defeat with the McDonald case due any Monday this month.

More importantly the truth has emerged through the new media about the failure of gun control to do anything but empower and enable violent criminals. Before the Internet, with only the major TV networks and Leftist newspapers, spreading their misleading and poisonous propaganda was smooth sailing. Those days are over now

In the last two decades, the Right to Carry, has swept the nation as law-abiding citizens regained the right to protect themselves on main Street. That massive movement has shot big holes in every Brady argument they’ve ever made.

The Brady Bunch is now trying to sell their mailing list. The list would have value among Liberal and Left Wing causes. Frankly they need the money to keep their doors open and meet their staff’s payroll. Nobody wants to donate to a lost cause.

Even with a career gun rights hater like Barack Obama in the Whitehouse there is little chance of gaining ground against the latest edicts of the nation’s highest court. The future of gun control is bleak indeed.

The Liberals and leftists are throwing all their money to protect their incumbent Congressional candidates from being ousted. There’s nothing left for the Brady Bunch.
Posted by Paul Huebl Crimefile News at 6/13/2010 10:12:00 PM

Its about time gun owners go on the offense.Dig deep,send in that extra $20 to the NRA to help with legal fees.Write those cards and letters,they have tremendous impact.Call your reps.

Crime File,anyway to get the CCW records of Hollyweirdos from California.I would love to expose these hypocrits.