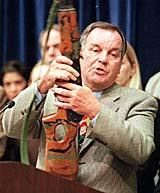 Chicago, IL—Politicians and threats go together. That has never been more prevalent in my lifetime than right now. Politicians are reaching their corrupt greedy fingers in American’s pockets more than ever as turn taxation into extortion and slavery.

At the same time despite a solid Supreme Court ruling many politicians still are doing all they can to keep law-abiding people disarmed and unable to defend themselves and families from criminals or a criminal government.

Threats are the product of the powerless. They are nearly always hollow and the people making them have little ability to carry them out. Threats are little more than an annoyance.

What idiot wanting to kill or hurt someone would give their victim a warning? The target simply could take precautions minimizing the threat.

In recent years lawmakers have conjoined the word terrorist to threats and raised their significance. Most threats are considered felony crimes. This is a horrible sign of a very troubling government.

During the reign of the Third Reich, making a threat against Adolf Hitler was a capital offense. The arrested many on flimsy evidence, held show trials and executions always followed.

Christopher Traynor Fox, 39 of San Jose, CA is accused of making a telephone threat against Mayor Richard M. Daley. Officials suggested this was over Daley’s stand on gun control.

Normally politicians get threats and never make them public because doing so empowers their tormentors.

Things are changing as frightened politicians hide behind armed bodyguards and have their visiting constituents searched like criminals. This is always the first sign of the formation of a police state.

It was just this week when Daley at a press conference picked up a combat rifle with a bayonet telling a reporter he’s stick it up his but to show the effectiveness of the weapon.

Daley was much more of a threat to the reporter than Fox was making a prank call from thousands of miles away. We will have to wait and see whether this was a credible threat.

Fox is being held on $1 million bail as officials are arranging for the expensive extradition process to bring Fox to Chicago for a show trial. This is at a time when extradition is only used in very important cases because of difficult economic times.

With this kind of a heavy handed approach, Daley is asking for an escalation in threats and violence. Daley may yet make himself a target of opportunity for someone that can tolerate a corrupt, nasty dictator. We can only hope.