Official Crimefile Pistol Review Of The HK 45 in .45 ACP 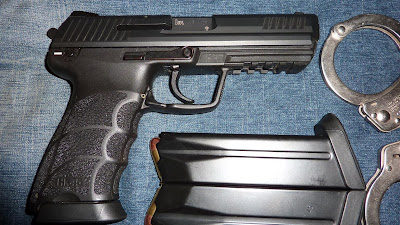 
Chicago, IL—Where else should I review a pistol but where they’re outlawed in the Windy City. When you’re in Chi-Town you’ve got to remember the cops are demoralized, outgunned and undermanned. Chicago’s draconian gun laws have established that local thugs have guns and are in control. That’s the sad situation while the law-abiding folks are sitting ducks, waiting for victimization.

In Chicago you need a gun that means business so why settle for anything less than a full size .45? If you’re going to pack a .45 it should be user friendly, and engineered to neutralize the recoil.

Most self-defense shootings happen in low light so night sights are important. Another consideration is that you may have multiple assailants and magazine capacity becomes critical. The HK 45 in .45 ACP has what you need.

Next, the heft, weight and feel of your pistol are important. Personally I have a fondness for the 1911, and the Sig P220 pistols. I’m not enamored with the Glock 21because of the trigger engineering. The full size HK 45 model weighs in at just under, 31 ounces.

Price is my least concern when it comes to survival I know I’m worth whatever I must pay to have the best. Of course spending money on fine guns is no substitute for adequate training and regular practice. To survive an armed confrontation you need, skill, a reliable firearm and luck.

I was never a real fan of the HK USP models that were lesser evolved products than the HK 45. This gun was to compete for a replacement military sidearm because decades later the Beretta 92F, 9MM pistols are far too lame for combat duty. The government canceled the project but HK had their entry ready to go.

The HK 45 is a superior product in every detail. The one I tested is the full sized model but there is a compact model too. The pistol can be modified by the owner to double action only that has been required by so many law enforcement agencies. This also comes with an accessory rail for tactical lights and Lazar sights.

The owner has the ability to configure the grip with a second choice of grip panel. All hands were not made equal so HK provided some help in this area.

If you live in one of the many, liberty loving states that allow silencers you can purchase an additional barrel threaded for the suppressor. Also available is a set of high profile sights that will rise above the larger diameter of your silencer. Why contribute to noise pollution and disturb your neighbors?

Shooting this gem is a pleasure. The trigger is so smooth and the let-off is really crisp. The recoil is incredibly manageable compared to other similar pistols. My overall rating for this product is absolutely magnificent.
Posted by Paul Huebl Crimefile News at 5/01/2010 07:41:00 PM

Email ThisBlogThis!Share to TwitterShare to FacebookShare to Pinterest
Labels: guns, self defense

i luve my HK 40 USP, perhaps its time for another right-off

The ACP in 45acp stands for:

Me likee HK products,expensive,well yes.But how much of a price tag can you put on your life?

Im still partial to my P7PSP in 9mm,although I prefer to have a .45acp whenever feasible.I just like the P7s compactness and unique squeeeze cocker.

I will have to look at the HK45,you can never have too many pistols.

The illegal invaders are ramping up the violence with torches and arson. http://www.santacruzsentinel.com/localnews/ci_15006740

Nice pistol, Paul but I'd recommend you keep an M1A and at least 400 rounds within reach these days.

Open carry your illegal HK91 in Los Angeles County and see how fast SWAT guns you down, eh? heh heh