Need Money? Why Not Rob A Bank When It’s So Easy? 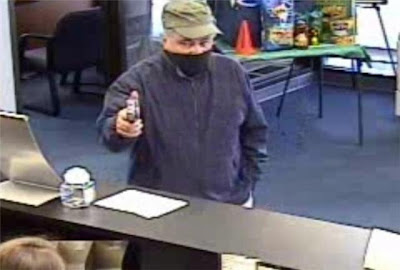 A few banks rely on dye packets and transmitting tags but today's bank robbers nearly always get away clean. For some bank robbery is a gift that keeps on giving because they do it again and again. There seems to be less risk attached to bank heists than shoplifting at your local Wal-Mart.

The metrosexuals at the new FBI should be hanging their heads in shame for failing on their primary mission. They have abdicated their responsibility here in favor of being Barack Obama’s thought police chasing dissident Conservatives like that Michigan militia group. That pathetic case is falling apart because there is much more to law enforcement than grandstanding for press conferences.

Since L.A. has gun laws that enable rather than obstruct violent crime well-trained but disarmed law-abiding citizens can only be on the receiving end of this kind of crime.

Meet a growing list of serial bank robbers in the Los Angeles area. If you take up this occupation you will for sure earn a moniker name. Go for something classy like the “Gentleman Bandit” or perhaps the “Glamour Girl Bandit”.

The biggest threat to these folks, are their ex-spouses and lovers that will rat them out. Why share you new job with someone that will have that kind of power over you?

"Why share you new job with someone that will have that kind of power over you?"

That is the discipline.