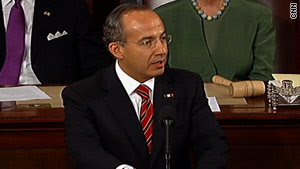 Washington, DC—As he condemns Arizona new law to make illegal immigration illegal, Mexican President Felipe Calderon is now demanding gun bans in America. He falsely claimed that the 45,000 guns seized in Mexico came from the USA when in fact they were from China or the former Soviet Union. We don’t sell those fully automatic imported weapons here.

The corrupt and anti-business Mexican government is the real reason for Mexico's poverty, lack of schools and medical care. The only business that succeeds in Mexico is the illegal drug trade. A high percentage of Mexican drug criminals work for that government.

As he tells Arizona their new immigration law is unreasonable, Calderon should instead ask the US to adopt the Mexican immigration laws instead. The Mexican laws make ours look very Liberal.

President Calderon, please go back under that rock in Mexico and take that Communist traitor, Barack Obama with you!

Any full auto or DDs(destructive devices)found in mexico were probably sold to their govt or police forces.If the bad guys are getting USA made hardware it is coming from their military or police forces.

But I will defend his, and anyone's, right to free speech just as, well maybe not exactly as, this young woman in London: http://www.metro.co.uk/weird/827061-naked-woman-in-yoga-protest-at-parliament

For anyone reading earlier comments here, I have deleted mine because it appears the perpetrators of the AK-47 killing of two Arkansas officers in West Memphis and the subsequent confrontation outside a Walmart that resulted in the shooting deaths of those perps were US citizens from Ohio. My apologies to all for giving in to my fears and, apparently, my prejudices. Read the latest here: http://www.azcentral.com/arizonarepublic/news/articles/2010/05/22/20100522ArkansasOfficers0522.html