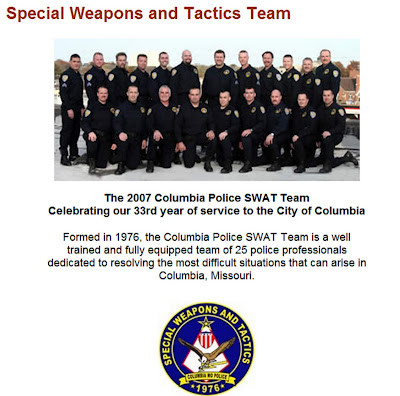 Columbia, MO—The local police SWAT Team gathered their resources and guns for an important drug raid. They were invading the home of Jonathan E. Whitworth, 25 on February 11, 2010. Also present were the suspect’s wife, seven year old child along with their two dogs.

In came the police heroes with their warrant as they quickly shot both pets in front of the child. You can hear the horrible cries of the animals on the video. I can’t imagine what the little boy thinks today about police officers. That trauma will haunt him for the rest of his life. I know he’d like to do to the cops involved exactly what they did to his dogs.

The raid yielded a very small amount of marijuana. Was this police action worthwhile?

It’s almost laughable that police charged Whitworth with child endangerment over the marijuana. Considering no less than seven rounds were discharged by police in this home, in the immediate vicinity of the child they claim was endangered.

This is precisely why I hate the Drug War. This kind of enforcement happens every day and is a cancer on our freedom.

The video is nasty and heartbreaking.

I saw that video on another forum. Makes me ashamed to be a retired police officer. As you said, this "war on drugs" needs to go away. After 40 years and no real change, it is time to use common sense and stop this madness. I feel sorry for the child who had to go through the trauma of watching his dog get killed for a small amount of marijuana. The whole thing was ridiculous and really gives cops a bad name.

Now here's a good movie...that kid grows up and shoots those retarded cops!

Wow, thirty-six years of training! Soooo, they're all ridin' the short bus to class I take it.......

Most SWAT types have some serious personality disorders.I love how they think they are special and have superior training.

Being an IPSC shooter,3-gun,skilled martial artist.I routinely run rings around these types and they still dont get it.

To be fair, I'd like to know more about how this went down. What kind of dogs were they, did they attack the Police, how much weed was recovered etc.,etc. If it wasn't a case of two vicious pits or German Sheperds then I say shame on these guys. They are idiots and give us all a bad name. I absolutely HATE this trend towards the militarization of the Police. Camo gear, masks, booney hats etc. They look like a bunch of little kids playing Army.

This is not what a SWAT team should be doing, but they do it to justify their funding.

William F. Buckley, perhaps the leading conservative of the 20th century, said back in the 80's that we can never win the drug war by criminalizing drug use.

There are many other options, too mamy to be discussed here, but suffice it to say that the DEA, FBI, and most police chiefs do not want to de-criminalize it because it would lead to a sharp drop in crime. To put it another way, a fire chief needs fires to justify all that spending and equipment.

Makes me glad to be getting my retirement soon. I'm so tired of all these goofs on the job dressed up like wannabe military soldiers. This is worse than the guys in New Orleans that beat up the old woman because she showed them her pistol. Let me ask "where do they find these idiots on these SWAT teams?" After watching my own department and yours Paul, the CPD, sandbag Ted over an illegal gun warrant I am done being the "police" Wish I never took the job years ago and I have learned not to tell people anymore what my profession is because stuff like this and all the sandbag pinches and DUI's done by my fellow police officers has ruined the job and has ruined the respect and gratitude the public used to have for us. I have come to hate the job now especially idiots like these guys.

One of the dogs is a pit bull. The other dog is a Corgi. Both lived with the seven year old. The seven year old was not frightened of either dog. The SWAT members were afraid of both.

The pit was in a cage, the corgi was scared and barking at big black bulky intruders, just a miniscule amount of weed, a bong and a sifter. They acted on an anonymous tip.......as they did the same to my brother in CO last year, all bullshit, 60G in attorney fees and yet he still did time along with get'n six years probation for less than 2 grams that turned into him being a big time drug dealer by the time of trial. An "evidence" file a foot tall with nothing in it. A wonderful female Judge by the name of Jolene Blair went along with all of it and denied him due process all the way through. The lovely Ms Blair cost Larimer County 4.1 million tax dollars for falsely putting a young man in prison by witholding critical evidence proving his innocence as the prosecuting attorney at the time. The lad did a number of years of hell while she rolled on to become a Judge. Good folks are get'n it bad all the way around all across this country by a corrupt justice system. The others in the "round-up" with my brother that had no money got off with a slap on the wrist while he continues to pay and pay. Tell me the Justice System isn't just BIG BUSINESS!!! A micro economy sucking the blood of taxpayers and "able to pay" citizens with dishonest dipshitted jackboot gestapo thugs as enforcers and henchman. There will be blood.....

The pit was NOT in a cage, he was running loose. Not saying he did not go after the "Officers" but he was loose. In any event, a sad,sad incident. No one benefits from this type of thing ESPECIALLY the Police.

Who Supports
The War On Drugs?

After the first five interviews with my brother Police Officer and Detective Howard Wooldridge of Lansing, Michigan (retired) concerning the "War on Drugs", more and more Americans understand the underpinnings of how the U.S. government protracts a national taxpayer fraud.

Would anyone in their rational mind support spending $70 billion annually for 35 years with zero results? Mark Twain lamented, "Suppose you were an idiot. And suppose you were a member of Congress. But I repeat myself!"

A boat-load of responses caused me to interview Howard Wooldridge further. Many Americans bring heated emotion to this national tragedy. My brother brings reason coupled with logic! However, many don't want to accept or deal with reality. Several readers condemned Howard for his stance. However, they lack any solutions. Guess what buckaroos, my brother takes action where others complain. He educates U.S. Congressional representatives as you read this interview.

"The California Narcotic Officers Association fears the loss of their paychecks, knowing that the sensible People of California would legalize, regulate and tax marijuana the day after the feds end the National Prohibition," Howard Wooldridge said. "Even if they did not lose their paychecks, they would be reassigned to go after drunk drivers, child predators and other public safety threats. That type of work is boring compared to kicking in a few doors a week, waving their guns around and arresting people. Heaven forbid they would have to take a stolen bicycle report!

"MS-13 gang makes billions selling illegal drugs in the USA. They would not be happy to see the end of Prohibition. They would have to go back to landscape jobs! President Bush supports the Drug War to keep his Pharma Industry lobbyists happy. He views the weekly deaths of young teens that die selling these drugs on the sidewalk as 'God's Will.' So no problem there! Mexican drug cartels enjoy the finest tequila and tacos in Mexico on the money they are making. As a bonus, their narco-dollars buy them influence at the Presidential Palace in Mexico City. The private prisons in the USA lobby for more mandatory drug sentences in order to keep their cash flow coming. The Meth Makers of Mexico make billions exporting their product into the US and Canada."

"As you can see, the supporters of Prohibition Two are numerous and well-funded," Officer Wooldridge said. "Nonetheless, I will use my one-eyed horse Misty and my Stetson to promote the end of the most dysfunctional, immoral policy since slavery until it is in the history books, or I draw my last breath."

That Swat team is not very diverse all WHITE.

SWAT (Special Weapons and Tactics) teams were virtually unknown in the '50s and early '60s; but today, SWAT teams have become so prevalent, they're even used in routine warrant service in drug cases, and other nonviolent crimes, in spite of the fact, that para-military actions often trigger violence instead of defusing it.

University of Eastern Kentucky criminologist Peter Kraska estimates there's a frightening 1,500 percent increase in the use of SWAT teams in America, from the early 1980s to the early 2000s. The use of SWAT teams has reached such proportions, that the America of 2000 has become all but unrecognizable, today.

The corporate media reports few of the over 800 times a week, SWAT teams break into American homes, trash them, shoot any dogs and cats they see, and under the asset forfeiture and seizure laws steal what they want under the pretense of gathering evidence.

Less than one-half of these home invasions result in felony charges. In fact, many of these SWAT assaults are at wrong addresses, with no redress for stolen property, killed pets or humans.

To "serve and protect" no longer seems to be the role of our peace officers; indeed, today such officers are even labeled as "law enforcers," an enforcement that will be needed to force unpopular laws on the public, laws that do not have the consent of the governed. Police units in America have become an occupying military force.

F--king goons had all the right equipment, but had to keep asking if one of them had a miranda rights card! Insane , one of the goons looked a little befuddled, as if what the f--k we just do?
Why don,t you who swore to uphold and protect, visit the Capital and really do your tax payer funded job!