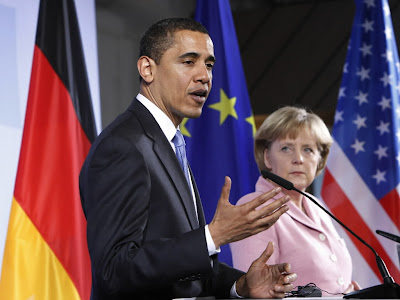 An EU coalition with Merkel’s leadership and our Socialist President, Barack Obama’s influence has agreed to loan Greece $650 Billion for a bailout. There is zero chance the money will ever be repaid and German families will suffer greatly because of the Greek politicians that spent Greece into bankruptcy.

I can’t imagine what Merkel was thinking. Merkel certainly sounded a death knell for her own political future. Merkel is following Barack Obama straight to Hell!

Instead of bailing Greece out they should have kicked that country out of the EU. Other European countries kept their own currency and Germany would have been better off to return to Deutsche Marks and ditching the Euro.

Greece has become a country for entitlement addicted losers. That government and the fools that elected it should be the ones to suffer not German families.

This is a sad day for Germany and a sad day for Europe. Instead of one country in dire straits, all of Europe will face economic disaster.

I’m sorry that Greeks are now fighting in the streets and doing without. It’s only a matter of time and that will be the state of reality in America. Printing money with nothing to back it is society suicide.

This bailout plan is nothing more than a huge step in the direction of world Socialism. Socialists have always brought nothing but death and misery to every country they have dominated. Germany above all countries should be fighting Socialism not supporting it.

Germany has dramatically changed since the fall of the Berlin Wall. They now have three generations of pathetic people that only know how to survive with government handouts.
Posted by Paul Huebl Crimefile News at 5/11/2010 08:37:00 AM

Lets hope the Germans dont produce another Hitler in their anger

Obama like Hitler is a Socialist. Merkel is on her way with this horrible action.

So far the anger is thankfully directed at Socialism and Socialists.

Call it National Socialism or not Hitler was a Fascist. Plain and simple. I am a Socialist, actually I am a Communist. The real point I am trying to make is that I think the entire concept of loaning is a horrible idea in and of itself. You created a "Union" over there in Europe for the express purpose of pooling your resources against America and China. Where the hell did greece borrow the money that got them into this situation from in the first place? Debt does not just materialize out of thin air, and one day this is all going to come crashing down. There will be misery, poverty, starvation, conflict, and then ultimately something new will come about. It has happened before, it will happen again. It is extremely foolish to think that any one system or institution (political, religious, educational, etc) is eternal.

I must say that Hitler was both a Socialist and a fucking Psychopath. You cant equate the two. He did manage to turn a post Versailles Germany with no work, and no money into a nation with no unemployment, gun control, and many other things. If you were a Ge rman in Germany at that time life was good, unfortunately Hitler and the rest of the Nazi Party also committed one of the most horrendous acts of genocide in human history. It was not socialism that fueled that, since socialism is an economic policy. It was a policy of genetic superiority and the "aryan race" that fueled the Holocaust.

Socialists, Communist or National socialists are all the same. Everywhere their flags fly millions always die.

Hitler’s Holocaust was overrated compared to Stalin or Mao. Take all the smaller countries in Africa and Cuba simply add up 12 years of Nazi genocide considering the much smaller populations and they equal or exceed anything Hitler did.

Nine million Germans died under Hitler in addition to six million Jews. The red Flag of Marxism in any form is pure murder.

Socialism and all of its derivatives is evil ugly and must me stamped out.
Everyone wants to pretend that Hitler was somehow worse. All the Socialist despots are equal their evil ways.