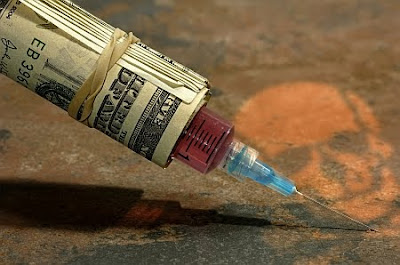 Government officials are warning the nation’s heroin addicts of a deadly shipment of especially pure heroin that puts users down like bad dogs.

I despise drug laws and the Drug War because they have destroyed our once sacred Fourth Amendment and has cost taxpayers untold billions. I totally resent funding the Police State that the Drug War has created.

The only beneficiaries of the Drug War are the drug Lords and over-paid government Drug Czars.

An early and quick death for those pathetic humans that have hooked themselves of drugs is the best possible cure to their problems. I have seen so many families torn apart because of addicted and their foolishness.

Along with all the police raid and drug dispute mayhem there are of course the millions of burglaries, armed robberies and associated murders committed by heroin addicts supporting their drug appetites.

Drug addicts are monkeys on the backs of taxpayers, their families and loved ones. The Drug War is an ugly stain on America that must end through legalization. Taxing illicit drugs will only create new opportunities for criminals and must not be allowed.