Daley Says He Will Find Ways Around The Law To Deny Gun Rights! 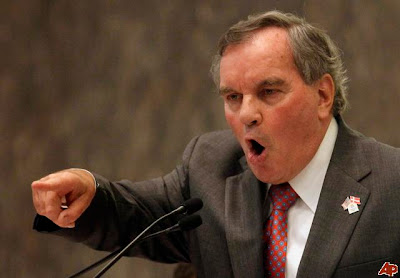 Chicago, Il—For 30 years politicians in the Windy City have aided violent criminals by keeping law-abiding people disarmed through a gun ban. Local government here has enabled violent crime rather than fight it.

For nearly a half hour Daley used a table laden with guns as movie props to express his hatred for them and Chicagoans right to keep and bear them.

Daley made it clear he will dictate new laws designed to frustrate those who want the means to defend themselves and families with firearms. Daley will demand liability insurance, excessive training and extortionate taxation. Liability insurance for gun misuse is not offered anywhere and if there was such a thing Daley knows it would be unaffordable.

Daley falsely claims that without the gun ban the murder rate would be 30% higher. Every study ever conducted shows gun laws have increased murder rates and that millions of American citizens use guns to stop violent crimes without even firing a single shot.

Daley is a lawless thug using color of law to violate the Constitutional rights of citizens. All lawless thugs including Daley need to be stopped cold. They are a cancer in our government that needs to be cut out.

Why doesnt he give up his 22 man body guard detail.Why dont they amend city ord so aldercreatures cant carry in the city.

Anybody have any inside info if Daley packs a gun,I bet he does.I bet he keeps guns in his homes.

"Maybe one of them will have an incident and they will change their mind." The way he said that. Makes me think, that he would mind if something did happen to one of the judges. As long as he would get his way.

What an A-hole. He uses the death of a Police officer for his political stance. ROT IN HELL! Thank god the officer's retired father had a gun & was able to use it. One dead, one critical & two others in custody. If more law abiding citizens were armed- these punks would have second thoughts of commiting these crimes.
Just saying
I/F forever

Any way to check if Daley has a FOID card?

That reporter should have pressed charges against Daley just to mess with him, because I’d love to know if he has a FOID Card. If he does, he’s a hypocrite, but if he doesn't have a current card, he should be charged with a felony, just like the reporter would've been had he pulled a similar stunt on Daley.

I know this is just wishful thinking, but wouldn't it be grand to see Daley put into general population at Cook County Jail? He'd soon find out what it's like to have something shoved up his #@&!.

I'm sorry for the language, but this little prick should die and rot in hell. He is a spoiled brat, who if he doesn't get his way starts sputtering his asinine rants. Great answer to the journalist about sticking the rifle up his butt. He truly doesn't care about anyone or anything in this city besides his own pesonal agenda. If he had his way every Chicago cop would be disarmed except for his security detail. The police hate him and he hates us. Every time he gives his phony sympathies when a cop gets killed makes my skin crawl. Then he hires the coward ex-fed to head the CPD. All J-Fled wants to do is screw over any and every cop he can. When Weis puts on the uniform it makes every copper just knock him out and rip the uniform off him. He never earned that right and never will. I have a written order that if I ever die in the line of duty, Daley, Weis nor any other politician will be allowed at my mass or allowed to speak. I don't want to have to think these assholes will be allowed to speak their hollow words about me.

Hey Shortshanks, none of the free people of this country care what you say about guns. You are the biggest hypocrite there is by surrounding yourself with armed police all while constantly complaining about the evils of guns. Your days are numbered, you lying thief.

Only in Chicago can this asshole use the people's money to fight for something the people don't want. Hey sounds like what Obama does in Washington too. Maybe it's a Chicago thing?

Why can Daley handle a firearm without an FOID Card? I have to produce mine just to look at a gun at any gunshop in Felonnois. Nothing but hypocricy. Glad this sawed-off pig-shit Disgrace to the Irish Asshole is retiring, good Riddence..

Daley and his Communist Fifedom of Crookago, Felonois, think they are immune to the
U.S. Constitution. Just ignore this little hypocrite Freak, who allegedly owns Tons of Guns himself.