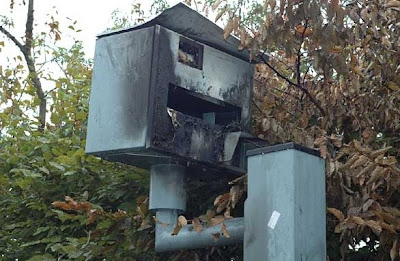 The current Governor Jan Brewer cancelled the contract with the private company victimizing drivers on Arizona’s highways. The cameras will vanish on July 16.

Of course the Arizona Department of Public Safety will continue to patrol and cite drivers over safety issues.

In recent years extortion has been the tool of choice for government against Americans. The trend is epidemic as politicians have learned that they stay in power through awarding government contracts for unneeded goods and services. The same politicians have bankrupted America and extortion is the only program they know to keep the cash flowing into their campaign funds.

I’m proud to have known this great lady for a very long time and must declare that Governor Jan Brewer ROCKS!
Posted by Paul Huebl Crimefile News at 5/06/2010 06:16:00 PM

IT TAKES GUTS TO BE JAN!!!! Thank God for Jan Brewer. Arizona has a chance to overcome its troubles with her in charge.

IT TAKES GUTS TO BE JAN. Thanks be to God for her. We need more leaders like her.

She's got more balls than that two faced treasnous twat Juan McCain that's for damn sure! Long live the Patriot Queen of AZ!

I'm just a poor Mexican and all I want is free food, medical care and housing for my wife and 8 kids. Give me a break gringo!

Anonymous said...
I'm just a poor Mexican and all I want is free food, medical care and housing for my wife and 8 kids. Give me a break gringo!

The only thing you will get for free is both barrels.

God bless Gov Brewer. Sometimes it's hard "enforcing" the law and doing the right thing, but thank goodness there are some out there still willing to do it.

"The same politicians have bankrupted America and extortion is the only program they know to keep the cash flowing into their campaign funds."

How are the "photo enforcement" cameras any more extortionate than the 1% "temporary" sales tax hike that Governor Brewer supported?

Oh, that's right. "We" voted for it, after Benevolent Big Brother threatened us with laying off teachers, closing schools, discontinuing fire department and police service, and ... everything but cutting UNNECESSARY spending.

The federal, state, and local government could cut spending by 50% and still retain all essential services. For example, the Pima County Public Defender worries about the cost of toilet paper, but spends $150,000 on cheap furniture that was unneeded and of poorer quality than that it replaced ... thus giving them an excuse to replace it again in a few years. $150,000 could also have paid the salaries of the employees that were laid off to meet "departmental budget cuts".