The Soviet Rape Of Berlin’s Women And Children 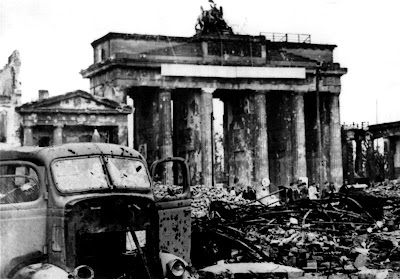 Adolph Hitler, a Socialist politician promised the German people, Hope and Change. Hitler was competing with the Communists for control. History shows both political parties were miserable Socialist tyrants. Germany’s people went on to lose nine million souls through war, bombing and political murder. That does not include the six million souls murdered at Nazi concentration camps or during transport.

The German people like everyone were optimistic their leader would be a paternal icon that would deliver them from their suffering. Like today’s American politicians Hitler deceived the people that supported him.

Hitler knew full well that even the most anti-Semitic German people would never support his unbridled slaughter of Jews. That was a carefully guarded State Secret and bureaucrats that knew referred to the murder program in polite coded terms, “The Final Solution.”

The German people suffered constantly from World War One until well beyond the Second World War’s end in 1945. The occupation by foreign Armies was brutal. Random warrantless searches and thefts of personal property were a German's constant companion. Soldiers and bureaucrats simply moved into every nice home they could find evicting the occupants.

Berlin was subjected to special horrors since the Soviets conquered this once thriving capital city. The Bolshevik Army simply took the women and children as sex slaves. They raped and raped with unbridled brutality and this just went unchecked. Most women in Berlin had lost their male family members and there was nobody left to protect them. The few men left in Berlin were deprived of their wives, daughters and sisters by rapists sanctioned by the Russian government.

In desperation German women had to resign themselves along with all their dignity and adapt to their new lives. Many women learned their only salvation was to try and pick a single strong Russian soldier to service so they were not constantly gang raped. The women found it was better to be the property of just one rapist.

The Allies divided Berlin into four sectors. The Russians, Americans, French and Brits each owned a piece of Berlin. The Rape in the Russian zone never really ended until the Berlin Wall came down 20 years ago November 9th.

The Western sectors of Berlin were cut off from every form of food, supplies and heating fuel by the Soviets whose new territory surrounded the city. Berliners are still grateful today to the Americans that risked their lives flying in food and needed supplies to them during the Cold War's Berlin Airlift.

The German people slowly were allowed to go about their business in peace and rebuild. With American help West Berlin regained its charm beauty and culture. The occupation ended and Germany today is a powerful friend and NATO member.

Yes it’s true, I hate Communists and Socialists more every day. They are the Parties of Murder. People acting under the color of these governments have a record of non-stop killing and horror. We must end their hold on America through whatever means we have. Socialists are an evil cancer that must be cut out or we will face the horrors they always unleash for certain.

The Berlin atrocities and War Crimes committed by the Russian pigs went unpunished, but the tragic memories of the now elderly women, is still there.
Posted by Paul Huebl Crimefile News at 4/24/2010 11:41:00 AM

One of the competitors in this weekend's Regional Conventional Pistol competition in Phoenix lays out his equipment on a blood red pad with the inscription "Freedom is not free."

As I prepare for each string of shots and glance over at his firing point, I'm reminded that the responsibility for -- as well as the joys of -- our continuing freedoms are now ours to protect.

"Shooters to the line."

I think you might like to read this: "Icebreaker" by Viktor Suvorov. The subtitle is something like How Stalin Started The Second World War. The author, a former Soviet intelligence agent and military historian, has written what reviewers have called a complete refutation of the official history of the beginning of the war. I understand there are only a few hundred copies in existence (over a million in the original Russian) and they are expensive. Online only. I have German blood on my father's side and have long been angry over the treatment of Germn civilians during and after the war.

Those Russians escaped war crimes prosecutions and that was wrong.

Of course Russia started the war! With Germany Ribbontrop-Molotov signed the pact and they both knew they were going to eventually go to war with each other. The Finn's had no interest in being Nazi's they hated the Soviets, Russia invaded the Finns, Poland, Baltic States as Germany invaded Poland's Eastern border.
Crimes unpunished? Nuremburg gave a pass to every war criminal that had scientific or military value to the allies. How do you think we got to the moon? U.S. soldiers were not supposed to take Japanese prisoners and shot those who were unarmed. That is in most history documentaries. Germans raped Belgian women like crazy and that is well documented, yet never brought to trial.. You take otherwise civilized young men and in the case of WWII most of the powers were not signatories of Geneva convention. So rules of war were what suited civilized people who were thrust in a uncivilized situation. People sit in their armchairs and say, "that is terrible, I would never act like that!" The old Indian saying of not judging until you walk a mile in someone else's moccasins apply here. They know that since they had their women raped for centuries by US troops, "fighting for freedom."
People think they are civilized, we are not.