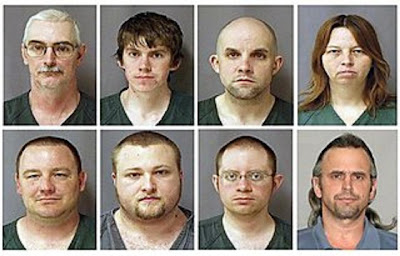 The Whitehouse wants to intimidate and bully those who’d dare resist the Obama Socialist Revolution. How better to do so, than to label dissidents as terrorists and destroy their lives with raids, arrests and prosecutions.

What’s left of the discredited and doomed mainstream media better known as the, Obama Propaganda Ministry was quick to rewrite and publish the Justice Department press releases on the recent militia raids and arrests. This propaganda was to help with the Obama intimidation program aimed at dissidents.

Now comes the hard part, producing real evidence. Let’s start with the so-called illegal weapons. Weeks later the FBI claims they’re still testing the firearms and don’t know if they’re illegal. That’s beyond lame and an admission that the firearms were in fact legal.

It turns out they have some verbal exchanges among the members of the so-called Hutaree militia exchanging half-hearted, big talk about what they think the politicians and bureaucrats deserve for their treason.

There were no specific threats or plans to actually do anything at all but talk. Considering that paid informants infiltrated the group any of the braggadocio was undoubtedly inspired by the snitches sent to entrap them.

The FBI wants to keep the arrested dissidents behind bars in Detroit. The Whitehouse, Justice Department and FBI knows that any Detroit trial will have a super-majority African-American jury enamored Barack Obama. They will deliberate with hate against anyone that dislikes their Messiah and evidence won’t matter.

There is a conspiracy alright and that’s to violate the rights of any and all dissidents they can.

Now the problematic nature of the case is surfacing as U.S. District Judge Victoria Roberts’ questions about real evidence are going unanswered. The judge must decide if the nine defendants should be allowed to remain free pending the prosecution that may take as long as two years.

I can’t predict the ultimate outcome of this case since reverse race hatred, political competition and other factors are so heavily involved. The Justice department would have never pulled this stunt in an Area where jury panels would be not be stuffed with entitlement addicted Obama supporters.

I expect the Whitehouse and their goons to go after bloggers, radio show hosts and individual gun collectors that don’t share Obama’s hatred for the U.S. Constitution.

Some Americans will rightfully perceive government’s lawless and forceful political action an act of war and act accordingly.

Let me say this, Americans will never stand for another Waco assault on liberty. Government agents sent to victimize Americans will find themselves covered in their own blood. Millions of Americans are angry and willing to shed blood in order to preserve Liberty and the United States Constitution.

Update: On 3 May Judge Roberts ordered the defendats free peding further proceedings. The judge further indicated that the FBI's evidence was lacking.
Posted by Paul Huebl Crimefile News at 4/29/2010 03:54:00 PM

And you used to be a cop. I think if you thought that there was any serious credibility to these charges about wanting to assassinate cops, you'd be first in line to cheer their prosecution.

AMAF, many of these eight helped the cops in their area try to find a missing elderly woman.

I do not know if the Hutaree are nut cases or the victim of a federal sting operation, or both.
I do know that at the time of Waco there was in America still a certain residual level of trust in government. This trust is gone.
Waco is one of the reasons. I think the backlash if another Waco is orchestrated by the government will go well beyond merely defending against the agents sent to "enforce" some law or other.
People in positions such as Janet Reno our attorney general, during Waco or Eric Holder, who was instramental in the cover up will find themselves personally targeted. Michael Collins used this tactic during the "troubles" in Ireland and in less than a year ended the conflict that had been ongoing for centurys. Time reveals all and these people who fancy themselves as minor nobility should keep in mind the old saying of "Beware the fury of a patient man"
Paul in Texas

If these had been a black group Crime-y and all the other whites who read this, would be all over them.

In the very least they committed the crime of assault. It is disappointing Crime-y that you would take their side.

If you think that a right wing "militia" member would not shot down a police officer think again. The gun control issue by you and other conservatives in this case is a smokescreen.

Said by a committed Leftwinger. I will keep my gun powder dry and ready just the same...

Please have a look at Terror State with System and leave a comment... (to change the world)
thanX

Lefty,why did you become and officer??Why do you carry that little 5 shot snubby??Or are you just part of the Irish Welfare system of the murder capital?

Brother, I must admit that I failed you! I forgot to send a birthday card to you and I know how this bolsters your morale while you are being falsely maligned and incarcerated.

Just to let you know I am thinking about you today and I do pray for you almost daily. You will survive this INJUSTICE and with God's Blessing come back to work.

I have been around on the CPD awhile and I know and have witnessed the INJUSTICES of the two-tier system of discipline.

Bill, please know that I and many others fight daily for you, pray almost daily for you and have NOT forgotten you or your plight.

In the end at Waco, the guns were all legal semi-autos, in fact I read somewhere that there were less guns per capita in the compound there than the average in the rest of Texas. Randy Weaver won a big civil lawsuit against the Feds, too bad the highly trained sniper that shot his unarmed wife, while she carried a baby with both hands, was never charged with murder. He and all the federal agents involved in both incidents took an OATH to defend our constitution. Many of the "disidents" such as the Hataree Militia rail against specific politicians and groups, aka socialist liberals, but you don't hear them saying we should overturn the constiution. This is the best form of govt. that exists in the world today, to dislike certain upholders of liberty (politicians) is no crime. It is exactly what the founding fathers wanted, healthy dissent, tends to keep the potential crooks a little less crooked, when they know the spotlight is on them and people will speak up.

Anonymous said...
"In the end at Waco, the guns were all legal semi-autos"

Full autos are legal too my friend.Remember,we have a Bill of Rights that says so.Just because Govt infringes on that right,dont fall for the trap.

There is NO SUCH thing as an illegal gun.