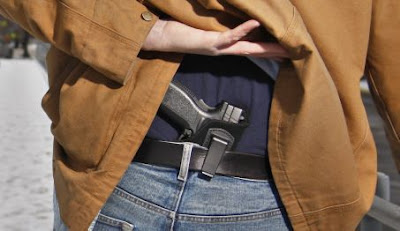 Horrible street crimes such as the recent, near fatal baseball bat beating of two pretty young women and the brutal fatal stabbing of a tourist by the Michigan Avenue Bridge are a rapidly growing intolerable threat.

Brain-dead politicians are demanding National Guardsmen get deployed to the inner city to combat the problem. That idea is unworkable.

Chicago has nothing to lose in trying a better idea. They can immediately end the gun prohibition they will lose anyway in the next 60 days because of the McDonald ruling that’s pending before the Supreme Court.

Right now the gun bans only work against the law-abiding folks that obey them. Police can't simply start searching everyone like they do at airports. Criminals are free to roam the streets with all the guns they can fit under their baggy jeans.

The City of Chicago has had 30 years of gun bans that have never done for public safety what the politicians promised. Gun bans are the problem, not the solution. Why deprive people of the means to defend themselves?

The Illinois Legislature can amend the Unlawful Use of A Weapon Statute to exempt those with a valid Illinois Firearms Owners Identification Card from arrest for carrying a concealed weapon. They can also require the FOID card WITH a security guard blue firearms training card or a certificate of training from a state, local or federal law enforcement training academy, or personal protection/Basic Pistol firearms course offered by the NRA.

Illinois should also recognize valid concealed weapon permits issued by any state within the United States.

Chicago’s street thugs would finally be on notice that the state or local government will no longer enable their violence. These cowards can be stopped, but only through a partnership between law-abiding people and the police. The people of the state of Illinois and Chicago deserve what they don’t have right now, meaningful protection.
Posted by Paul Huebl Crimefile News at 4/25/2010 05:47:00 PM

We need common sense gun control...I like using both hands

Where is Paul Kersey when you need him? Oh, he died with Charles Bronson.

Behnard Goetz is still alive, send him to Chicago where he's needed!

BEHNARD WHERE ARE YOU NOW THAT WE NEED YOU????

How about do what Vermont,Alaska,Arizona do,pure Second Amendment.People have to relaize its a fundamental right and not a privelage like driving.

You’re correct in your assessment of the absolute right to keep and bear arms. Chicago however has still been crawling backward.

When they move forward it will be with baby steps.

Vermont always had a strong state constitution and that’s why there are no gun bans there other than federal. Alaska and Arizona were rather late to end concealment bans. Arizona finally dropped permit requirement for concealed weapons.

The real fight all along has been to restore what we have already had.The Second Amendment is part of the Bill Of Rights,it superceeds everything else,you know,law of the land.

You are born with this right in this country.The Second Amendment also says arms,not just firearms.To bear means "on ones person".It doesnt get any clearer.

Militias are neccessary to the security of a free state.I love when these hollyweirdos and progressives try to paint militias as terrorist organizations.

Gun laws does nothing but help the criminals continue doing their dirt. If law abiding citizens were able to carry a gun with restrictions( proper training, no criminal background and does not owed child support )I think gun violence in the city of Chicago would be reduce. We already know criminals do not care about gun laws.

Thats a tan card, name has been changed to a Firearms control card.

I predict that with the violence spreading outside the so called "ghetto" sometime probably this summer some tourist,suburbanite, or one of the rising number of republican lakeviewer (yes they are out there) is going to be with their family in some popular touristy type area packing a concealed piece and will end up using it in a justifiable defense which will not be able to be ignored by the major media outlets.