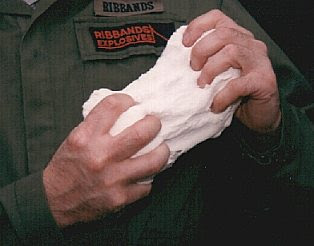 Imagine that you’ve been given an assignment. Bring 1 ½ pounds of simulated C-4 plastic explosive, blasting cap and a battery onto an Airplane. You will be rewarded by the government with $10,000.00 every time you can do this without getting caught.

I’d like that job because I know I could successfully pull that feat off once or twice per day, always avoiding detection. I’d also want to make sure that the materials are inert so there’s no danger should the materials somehow fall into the wrong hands.

If a reasonably smart person researched this they too could easily defeat the TSA and commit mass murder in the process. We are in fact at the mercy of those who would do us harm.

If someone wanted to place the C-4 on an airplane with a timing device and manage to not be on the plane when it is set off I’m certainly confident they could do that too. Thankfully, few people would ever want to harm innocent people for any reason.

You’d only have to defeat the sensitive vapor sniffing equipment and k-9s used by the TSA. You can pack the C-4 and blasting cap so that it would be unrecognizable sail through the checkpoints. It’s easy if you know what you’re doing.

Wardens of maximum security prisons can’t keep weapons out of prisons where total strip searches are done redundantly. How then can the TSA keep the tools of terror out of our airports? The answer is they can’t beat the determined and sophisticated terrorist with the program they spent billions on creating.

The only effective tool for preventing terrorism is criminal profiling and keeping foreigners from unfriendly countries off of our planes. Our government refuses to use the only screening process that will work.

Virtual strip searches, handcuffing passengers to their seats can’t stop terrorism. The only value of the TSA program is the illusion of security that fools passengers into thinking terrorism is somehow either slowed or halted. The TSA is a make work, jobs program, nothing more.

TSA is a joke,Stop hiring mutts and hire some real deal folks.

Here's what we need: http://www.youtube.com/watch?v=QclVGUHvRvE&feature=player_embedded

Why all the sophisticated scanners at our airports, searching our passengers ? Do they expect an American is going to bomb some other country. We need the scanners
at FOREIGN airports to keep the mutts out !

"The only effective tool for preventing terrorism is criminal profiling and keeping foreigners from unfriendly countries off of our planes. Our government refuses to use the only screening process that will work."

That is exactly what needs to be done. But these days everyone wants to be politically correct and not offend anyone, so they let Muhammad board the plane without being searched and then grab little Granny Smith from Iowa and give her a body cavity search. When will the madness stop!

"We'd do a lot better if we'd let off duty cops fly free if they are armed and carry hancuffs."

Just read an article (link attached) about why the Israeli's don't have the problems with airport security that we do. Interesting concepts they use, but we are too politically correct for that to work here.