"Political power grows out of the barrel of a gun." 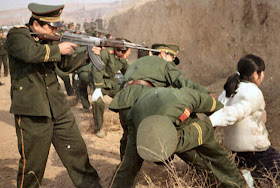 Mao Zedong made this famous quote in a 1938 publication. This was part of a larger statement that discussed public gun ownership as a hindrance to the world’s Communist Revolutions.

One thing for sure Communist and Socialist governments all love to use their guns liberally on their own citizens. Everywhere there has ever been a Communist or Socialist flag waiving there’s been a holocaust.

For some reason world history only seems to recognize the Nazi Holocaust and nearly ignores the hundreds of millions murdered in places like China, Cambodia, Cuba, Russia, East Germany, Romania and every Eastern European country. Communists uniformly slaughter civilians for political or trivial reasons.

Socialism, National Socialism, and Communism all share the same concepts of wealth redistribution, the need for absolute power within the government and the violent elimination of those citizens that dare demand freedom.

The Barack Obama Administration is rampant with proud Marxists. The other administration members are either too shy to admit their leanings other than to be openly sympathetic to Communist teachings.

Obama himself must be judged by his continuing Leftist actions. Obama’s obvious concerted effort is to collapse our economy and destroy our currency to weaken America for the Communist Revolution that he’s started.

The photograph at the top is from a recent mass execution of counter-revolutionaries and some who’s defied Communist tax laws. If Americans can’t recognize the danger and take immediate prophylactic action it may well be you or someone you love murdered by the government. We can’t allow Barack Obama or any politician to destroy our freedoms and way of life.
Paul Huebl Crimefile News at 12/13/2009 08:34:00 AM
Share

Be relevant, intelligent, and please leave out the four letter words.