Marina City, A City within A City 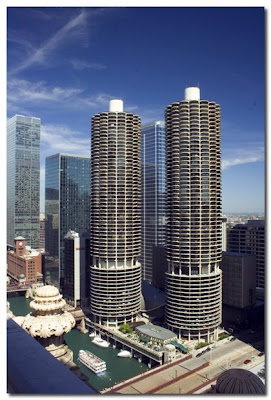 Chicago, IL--Shortly after returning home from Germany and the Army as a lad in the 1970’s, I had several friends who lived at this world class landmark. Two twin 60-story towers majestically rose in the skyline at State Street and Wacker Drive.

During the summer I was lucky enough to have two pals with powerboats and we’d take some hot gals out for great weekends on the lake. We’d either stay in St. Joe/Benton harbor, MI or Madison and Milwaukee, WI. We really partied on those trips.

In Chicago’s notorious winters you never needed to leave home unless you had to commute to a job somewhere. Of course most of my neighbors never had to walk more than a few blocks to work since so many employers were located were also located downtown. Snow removal downtown was always the number one priority for Chicago.

The best kept secret was the rent control program that made Marina City an incredible bargain over other less grand high rises in Chicago. My one-bedroom apartment only cost me $245.00 per month when I moved in. Tenants came from a long waiting list of well screened people. Yes, it took some clout to get inside.

Later it became a condominium development and I bought my apartment for a mere $44,100.00. Today that’s just the price of a good car!

Things have changed over the years and public corruption caused difficulties for the owners that had no control over the commercial portion of the property. It seems things finally got resolved and improved there.

I dated some really beautiful young women I met while living there and even got married there on one particularly cold night when the entire Lake Michigan froze over.

St. Patrick’s Day, and the boat parades with grand fireworks insured that we had the best parties anywhere.

Like the dozen or so other cops that lived in the building I got free parking the entire time I lived there. We coppers were able to park and retrieve our own cars rather than rely on the overworked car hikers. That was no small perk.

An Arizona business opportunity came as I opened my detective agency in Phoenix. Yes, I still look back and want to somehow recapture my youth.

Who could ever forget the spectacular scene from Steve McQueen’s last movie, The Hunter. Watch that scene right here.

I want to thank Steven Dahlman for the use of his picture. Dahlman has put together a great website with the history of Marina City in words, great photographs and videos.