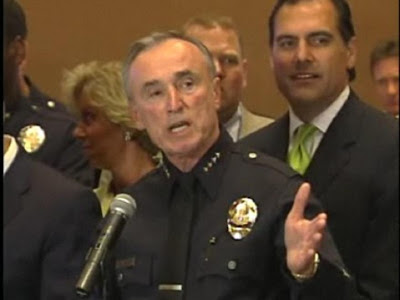 Los Angeles, CA—William Bratton announced his resignation just one year into a three-year term as LAPD’s top cop. The move is said to enable Bratton to take a post in private security.

Bratton seems to have avoided scandal, labor problems or out-of-control crime during his reign. The ride of peace and prosperity is rapidly coming to a close in the land of free money for slackers. Leaving now makes perfect sense for the 61 year-old in light of a bleak future for Los Angeles.

As California releases many tens of thousands of criminals from its prisons crime can be expected to rise off the charts. The convicts will be released into a bankrupt state that has chased far too many employers away through extortionate taxation. That’s a recipe for a total catastrophe. Bratton knows this and that he’s be better off anywhere away from the once Golden State.

This move has caught Los Angeles public officials by surprise. He also recently put his home up for sale. They will now have to scramble to find a replacement.

With California’s gun laws that protect criminals, law abiding citizens better rethink their following the unconstitutional gun prohibitions. Police will never be able to contain crime or provide reasonable protection for the public. Angelinos will have little choice but judicious use of self-help. It may be time to take one of the training programs offered by the NRA.

Bratton is expected to hold a press conference at noon today (PST). I don’t expect much light to be shed on his stunning departure.
Posted by Paul Huebl Crimefile News at 8/05/2009 10:49:00 AM

Great commentary Paul, you are spot on as usual. He knows the flood gates of hell are about to open up on the once great state of California, home of Ronald Reagan and John Wayne. It is going to be the wild west out there soon. Please stay safe.

Good riddance. After listening to his resignation announcement on local radio, it was obvious he doesn't have a clue as to how big a cesspool LA has become. His patronization of illegal immigrants,draconian gun control views will not be missed. At least not by those of us who speak English and don't collect welfare for a living.

I just wonder who will replace him.

CPD has a big FED Bubblehead that would love a job like that!

Paul your right about the state of LA.

But you were way too kind to this buffoon.

This is no big loss.

Could it be that former LAPD cops were revealing to higher ups, regarding their manipulation and deception to the citizens of bogus crime rate statistics?

What do you expect from a fake that calls his job as a "buffet table" he was a camilion that wanted a smorgasborgpoolize Dept. .

Paul, Bratton was a wanta-bee and is now a has-not. This means he never has-been.

To fit the criteria of a true LAPD veteran. One must have spent a minimum of FIVE years in patrol. Bratton did not.

Now most modern day ‘LAPD so called ‘leaders’ have not.

Yes the citizens do have a great reason to be concerned. As their stuck with a bunch of pencil neck geeks with no factual LAPD street experience.

They will lie about analytical data and crime statistics to make themselves look good.

I would say that the MOST qualified to be the next chief is Deputy Chief Mike Hillman. However after looking at the LAPD web site, it appears he ‘may’ have ‘just’ retired. I don’t see him there. Wow too bad. What a rock solid man he was.

I see on their site now, a few that I have worked with in ‘the streets.’

I’d say Dep Chief Sandy Jo., looks pretty go right about now. She was solid at 77th Division in the 1980’s. Two weeks ago I attended a conference and had lunch with a former commander. I asked him about Sandy Jo. Mc. He also spoke very highly of her. However people change when they get elected and/or promoted. So who knows?

Therefore I’ll refrain until I think back and do an analysis as to whom I would want as the chief (but then again I don’t have to live there.) Whoops don’t give them any ideas for their criteria. Or Michael Jacksons admirer and media hound Earl Paysinger may get it.

Could Bratton take the Car 3 job in Chicago?

LA... proved too much for the man.