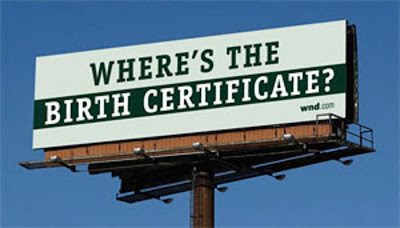 Atlah, NY--Pastor James Manning has never been a fan of that Communist traitor elected by gullible Americans. He seems to be understandably angry that Chairman Barack Obama has been given a pass on the issue of his questionable citizenship.
Manning is demanding Obama produce the documents he’s refused to share with the same Americans he once promised transparency.

Is this merely a distraction as some have claimed? It is easy enough to put to bed unless Obama has deceived America. We must demand the documents and investigate them. The truth shall set Americans free.

That is a really funny billboard! Classic, I love it.

NOT A COMMENT, PAUL.
Give a listen to http://www.ted.com/talks/jim_fallon_exploring_the_mind_of_a_killer.html - the presenter talks about a genetic as well as the environmental factors that create psychopaths, and also why they are mostly male. The followup conclusion is that testing may be able to reveal such tendencies -- so, should we? What about Obama's universal health care -- will genetic testing someday be mandated to determine not only who will benefit from medication but also who should be locked up because they *might* pose a threat to society? Interesting stuff!

CF,check out this link to the National Archives.See what the messiahs first EO was,speaks volumes.

Dr Michael Savage said that “Fox News today, is what CNN was ten years ago.”