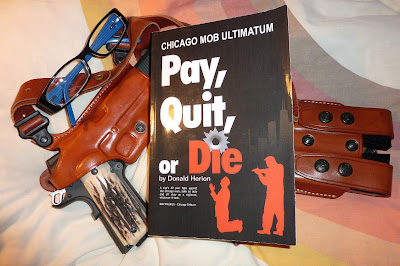 Chicago, IL—My long time, and recently retired Chicago cop pal, Jim O’Donnell said I needed to review a crime book written by his friend Don Herion who lived the life of a mob chasing Chicago cop for nearly a half-century.

In my law enforcement days I came into only casual contact with reputed mob guys and went out of my way to avoid them. Occasionally there would be a suspected mob killing in or around my beat. Other than taking an initial report or hauling someone to the Cook County Morgue when working a wagon I always felt I should keep my nose out of those matters leaving them for the “big guys.”

The big guys were the cops that handled those kinds of investigations. They were too close to the mob for my comfort and I was very satisfied never being assigned to a mob chasing unit. Herion worked with a who’s who of the “big guy” cops during his tenure.

Don Herion became a Chicago cop while I was in 5th grade. He managed to be a mob chaser most of the time and lived to tell about it even in print. Herion’s career was an exciting one to say the least. I always watched the dicks looking into those messy car trunks. I’d keep my distance whenever I could because the smell of decomposing flesh was and is way beyond foul.

Herion provides an inside view to the Chicago mob’s handiwork. It’s the stuff nightmares and gallows humor is all about. It is a great read.

Herion’s offering made me wonder just how many people would still be alive without the government’s need for victimless crime prohibitions. All the big money in organized crime can’t exist without laws controlling alcohol, drugs, gambling and prostitution. Public corruption involving politicians, cops, judges and prosecutors thrives on victimless crime.

The violence and corruption involved in the quest of victimless crime control seems far worse than victimless offenses. Herion’s book seems to make a case for that argument.

Herion was sworn to enforce the laws and he risked his life to the people of the State of Illinois to give them what they wanted from cops. That’s honorable no matter what you or I may feel about the need or desirability for some laws.

As for Herion’s book it’s a fascinating historical review of the career of a master gangbuster. Herion gives his readers real insight into the kinds of business opportunities available for people deep inside the dark underbelly of Chicago.

This is a super book. If you start it you can't put it down. Brought back a lot ao memories both good and not so good! Don't miss this one.

Is this the same Herrion that is on the radio all the time? I love his stories.
Mary L.
P.S. I would live to meet this dude.

This guy must be a nut! The "boys" have threatened his life so many times that you couldn't even count them.
I will stay with plumbing. At least no one kills you over the hot water heater.
Great book, well done but don't try that stuff at home...lol

hey dumb ass...where do I get this book? Does the FOP have it in their store? Is it on e bay? help help
I want to read it while on patrol...I will do nothing these days...no contract...and I may need a few stories to tell my grandchildren..

I found the book on amazon.com however it may be on ebay too....either way a great book.
When Jody does a book on his police experences it will be blank!

His picture is on the flap of the book and he is married, Damn, a girl never gets a break.
The old timers still talk about him in the district and he had a great rep.
joan 017

This guy is a combination Batman and Green hornet! I got the book about 2 weeks ago and couldn't put it down. He is sometimes mean to the bookmakers but I guess they had it comming. What a great read!! It tells it like it is.

Why cant someone tell the bookmakers side of the story just once.
We have the outfit chasing us on one side and the cops on the other. At times I would rather take a beating from the boys because they wont hurt you too bad because they just want your money. Some cops can get kinda mean.
Enough said.
We are mostly just family men that are trying to put the kids through school just like the rest of yous. Cops dont like us because our names can be a bit ethnick.
We aint bad guys just misunderstood.

I heard this guy on wgn and wind. He is a hoot.

I see you prefer a flat mainspring housing on your 1911.Galco rig??