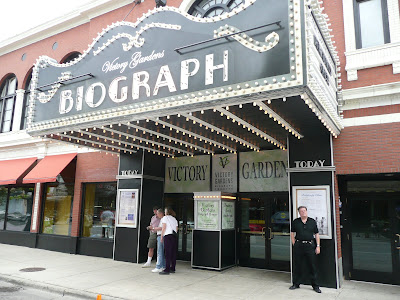 Who is that handsome lad in front of the Biograph Theater? Click to enlarge the picture.

Los Angeles, CA—This is a film I had to see. It culminates in Chicago with the ambush and killing of John Dillinger on a warm summer evening.

Dillinger was one of the more ruthless of the motor bandits that engaged in takeover robberies of banks during the Great Depression. Make no mistake, innocent people were killed and cops were murdered in the line of duty. Despite it all, Dillinger became a folk hero and icon because he went after what was perceived as the evil and greedy bankers.

J. Edgar Hoover built the FBI based on smoke, mirrors and some of the slickest public relations moves ever. He wisely used the intelligence his bureau gathered to extort funding for the FBI and his own professional longevity. Our sleazy politicians were and are always ripe for extortion. Anyone wiretapping them can own them.

Melvin Purvis was the real hero of the War on the Motor Bandits. When Purvis’ profile became too large, Hoover dumped him. Purvis committed suicide in 1960.

This Dillinger story needed to be told and Chicago’s own Michael Mann and his Forward Pass Productions were the master filmmakers to do it.

The real challenge was to recreate Chicago, Tucson and Crown Point Indiana into the 1930’s setting. The 1930’s costumes, cars, guns and overall look was solid. The recreations of the daring Dillinger escapes and the Little Bohemia Lodge shootout in Wisconsin were flawless.


The display and roar or the Thompson Chicago Typewriters and the BARs were beyond awesome. I was able to actually see and handle the guns used in the film with my long time friend Raj Singh of Eagle grips. Singh was involved to make sure the gun’s grips were perfect for the period.

Dillinger was a criminal with real celebrity, rock star status in a difficult time in American history. Michael Mann became a historian despite bringing us some scenes that never happened in real life. But we can’t forget there was the man, and his myth. The myth was no small part of the story.

Johnny Depp once again showed he can become anything or anyone and make it all so real.

I would have like to have seen the women in Dillinger’s life explored more but that would have added an hour on to the film. I only wish it were possible. The two hours of sheer entertainment of this film was too short for me.

On a side note: I have it on good authority that Depp fell in love with his Chicago typewriter and took the necessary steps to lawfully acquire that collector’s item.

The film was a classic and well worth the price of admission. Michael Mann pulled it off yet again.

Full cast and crew information from the IMDB is here.

You can always spot a West Hurley manufactured M1921 Thompson by the pistol grip.Most of them had flat sides and not the rounded ones of original Thompsons.

We'll start the 4th with the movie for our initial "fire works".

Later, we'll sit in lawn chairs in the front yard to watch the fireworks two blocks away with our coiled snake Gadsden flag displayed for all America -- and especially DC -- to see.

But it might be pushing the neighbors a bit much if we had a "Chicago typewriter" and a couple of 1911s on the table. (The S&W 36 with the new Eagle grips *will* be in my pocket, however. And my concealed carry card and ID, of course.)

And I have a good fedora for the occasion.

When I was growing up and we would play Army, John, the kid next door, would bring his make-believe BAR while I carried my make-believe (and inexhaustibly loaded) Tommy Gun.

Coming around the corner of Mrs. Williams' house and seeing John, I'd blast away from ten yards but he wouldn't go down. Instead, he'd watch for a moment then raise his BAR and shoot a few rounds.

"I'm not dead! I shot you a hundred times with my Tommy Gun before you tried shoot me!!"

"Nope, you missed. You sprayed all around but never touched me. I just nailed you with half a dozen rounds from my BAR. You're dead!"

And so I fell dead right there.

(Enjoyed the movie. Thanks!)

A few closeup scenes where Depp's pierced ear is noticable detracted from the moment for me.

I haven't seen the movie yet, but intend to. Another that really needs to be made is one about Frank Hamer. The Bonnie & Clyde story needs to be retold, this time from Hamer's viewpoint. After all he was the good guy of the story, not the thug portrayed by Denver Pyle 40 years ago.