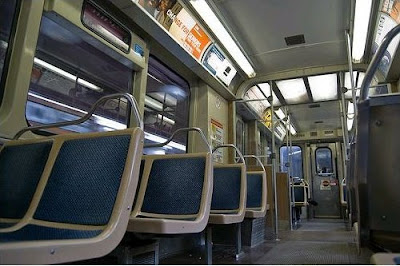 Chicago, IL—In Chicago women riding public transportation alone are frequently victimized by thugs who grope them while making sexual advances. What they are covering up is the reality that the offenders are exclusively African-Americans and the victims are for the most part, White women.

The CTA’s new breed of sexual predators often resort to intimidation forcing their victims to submit to their attacks. Robbery also is often included in these vile encounters.

Today’s Chicago Police Department provides less than a minimal presence on the CTA’s train system. Now CTA officials want their regular employees to try and somehow intervene. The new employee patrol concept is not designed to control the behavior but to provide liability relief so they can show they’ve taken steps to alleviate or lessen the problem.

The CTA is far more concerned about money than the safety of our mothers, wives, daughters and sisters. The only reasonable response is regular police patrols and they don’t have the cops to handle this.

As for the women and men for that matter riding the CTA I can only suggest breaking Chicago’s unconstitutional gun laws. Get the training, suitable handguns and the courage to shoot some of the rats.

You have no duty under law to call police, make reports of your justifiable use of deadly force in America. Our Constitution’s Fifth Amendment gives every American and absolute right to remain silent.

If the police want to ask you anything you simply say, “I will be happy to talk to you after I have a lawyer at my side.” Police officer’s are required to cease asking questions after that.

If the cops think they have sufficient evidence to arrest you, you will never be able to talk them out of it by telling them you were in fear of your life. That statement is always used a tacit confession.

Shoot and kill the rats then simply walk away. Wounding the rats will insure their statement, “That crazy woman shot me for no reason!”

The sight of dead rats carted off in rubber bags will deter others. Kill the bastards and let God sort it out.
Posted by Paul Huebl Crimefile News at 7/16/2009 08:34:00 AM

A group of black police officers has filed a civil rights lawsuit against the Philadelphia Police Department over an Internet discussion forum on which officers have allegedly posted hundreds of racist comments.

The site bills itself as "the voice of the good guys."

The suit maintains that officers often make postings from department computers and that it is well-known among members of the nation's fourth-largest department. Though postings are anonymous, the site's founder and moderator — who uses the screen name "McQ" — is known to be an active sergeant in the department, the suit alleges.

"The Guardian Civic League has been watching Domelights for the past two years," said Rochelle Bilal, the group's president. "We are sick and tired of them hurting our people by their comments. ... They are further dividing this institution."

The lawsuit cites racially derogatory commentary on the site, including one posting that says: "Guns don't kill people ... Dangerous minorities do." Other posts include racial slurs and encourage racial profiling, according to the lawsuit.

Material on the site is often discussed in the workplace, the lawsuit said, creating a hostile work environment for black officers.

A police spokeswoman said the department would not comment on the suit and referred questions to the city's law department. Messages left with the city solicitor and the Fraternal Order of Police were not immediately returned.

"They need to step up and stop this conduct," said attorney Brian Mildenberg, who represents the plaintiffs.

Mildenberg said he had been working with the Guardian Civic League on the lawsuit for about a year, poring over the site's archives and interviewing 20-30 black officers. The suit does not identify the officers believed to be running the site, or how many could be involved.

Sgt. Shaun Butts, a veteran who attended a news conference announcing the lawsuit, said postings often allege that black officers who get promoted must have cheated on their exams.

"It's always quoted as 'We're all blue,'" Butts said. "But then it makes you think, 'Are we really all blue?'"

The CTA should hire the private sector.

They always do a better job at personal protection.
But shoot ONLY in a real defense of your life.
You don't want your readers to go to jail.

CCW would do wonders at combating this.The MEs office would probably have to expand its freezer space.

Thats what I do Paul.I have been carrying a handgun in chicago for 25 years,no im not a cop.I have alot of training,alot more than 99% of officers have,sorry.

I will not be a victim,I also will not cooperate with officers.

I tried to cooperate with the LAPD and look what happened to me...I never again will open my mouth to LE....they will lie, mis-state the facts, put a swerve in every word that comes out of your mouth to make you look like one of those who they should be chasing....bottom line is, unless you wear a badge you will be treated like a criminal.

Wow whoever posted that article about that Philly PD web site thanks.

I sure hope the defendant prevails.

Everyone should have the women in their lives carry “Wasp Spray” in their purse. They should have a can at every entrance to their homes and within arms reach in their cars too.

Personally, I’d prefer that they carry a gun, but as long as Daley still enforces his unconstitutional gun ban depriving the citizens of self defense by making it a felony in Chicago, this will have to do. It has better range and is much more effective than “Pepper Spray” too.

If they hesitate to shoot someone, if even for a moment, (and most would) it could cost them their life. But most women wouldn't hesitate for a second to spray some asshole in the face with a product that's 100% legal, and any 5 year old could go buy at the store.

After they transformed their attacker into the victim, and he’s rolling around on the ground pleading for mercy, like the cowards that they are, she could then decide what to do with him after that. At this point, it’s entirely up to her and her options are virtually endless.

She could...................
*go about your business
*call the Police
*kick his teeth in
*kick his balls up into his throat
*continue to empty the can up their nose
*empty it in their eyes and permanently blind them
*find any blunt object and castrate him
*take out a lighter and see if wasp spray is flammable
*use a blow torch and get medieval on the asshole

Or if you're a kill joy or just not in the mood to have some fun, you could always cut his throat or put a bullet in his temple. (Boring)

Check out the video.
http://abclocal.go.com/wtvg/story?section=news/local&id=6650350

A flare gun is another 100% legal option and cost less than $100 to purchase. I shot one of these down into the water in a lake up in Wisconsin at about 1:00 AM, and for about 45 seconds the whole lake was glowing. I'd rather be shot with a bullet than have 1,200 degree phosphorus burning inside me.

Always lawyer up. Believe me after being lied about, denied some of my rights, suspended and denied any type of fair and impartial investigation all of this by my fellow CPD IAD rats, OPS, Supervisors and Corp Counsel Paul is right. Walk away and if stopped by CPD just lawyer up and never and I mean never co-operate cause it will be used against you.

It's time to roll out the southwest side welcome mat on these assholes...

I will not be a victim,I also will not cooperate with officers.

I think any non-felon should be allowed conceal carry in Chicago, but with an attitude like that there is a good chance of CPD ruining your day.

Its a simple concept.Why cant I take care of things myself??Police should be freed up to help those who cannot fight for themselves.

As a 29 year veteran of the CPD, I can assure you that if I EVER come across a situation in which a person carrying a pistol illegally, uses that pistol to defend him/herself in a situation like you describe, I will do everything I can to make sure that that person is not charged. I might even help them get away.

Anonymous said...
As a 29 year veteran of the CPD, I can assure you that if I EVER come across a situation in which a person carrying a pistol illegally, uses that pistol to defend him/herself in a situation like you describe, I will do everything I can to make sure that that person is not charged. I might even help them get away.

Office,thanks for the support.But it is not illegal to carry or own a weapon.By arresting and prosecuting a citizen you are violating their civil rights.Self defense is self defense,denying that right is treason.

If you see me fleeing the scene,you didnt see me,thanks,stay safe.

29 vet of the CPD here-
I understand that. But in Chicago, it IS illegal to possess a firearm on the streets of Chicago. I disagree with that law as I support the entire Constitution but it is there.

Anonymous said...
29 vet of the CPD here-
I understand that. But in Chicago, it IS illegal to possess a firearm on the streets of Chicago. I disagree with that law as I support the entire Constitution but it is there.

Which law do you refer to,the Law of the Land or a City Ord?You took an oath to support and defend the Constitution.

Where I come from,the Bill of Rights takes precedent over a local charge.

And are you capable of reading? Read my post again and stop asking dumb questions.