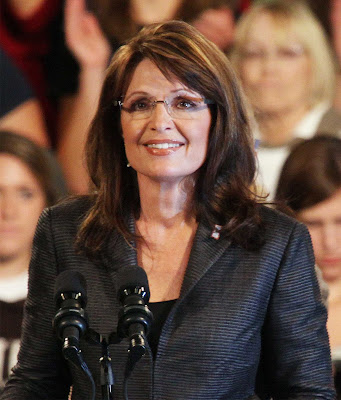 With a never ending onslaught of phony ethics allegation by loyal Obama Communists, Sarah Palin was silenced and nearly forced into hiding. The allegations all had to be fought with expensive lawyers and of course all complaints were utterly without merit.

Conservatives know that the far Left loonies are terrified of Pailen’s ideas, motivational ways and her downright glamorous appearance. Palin brought the only excitement to a really lame Presidential race. The problem was she’d have only been Vice President.

Conservatives rightly rejected John McCain since his Senate votes were most often in lockstep with Obama and Clinton. McCain was no more a Conservative than Colin Powell.

Palin was and is a real breath of fresh air in American politics. She knows what it is like to actually struggle in our economy, and is a proven champion of liberty and freedom.

With Palin now out of the Governor’s office she has regained her rights to speak to all Americans yearning to be free from the yoke of extortionate taxation and ridiculously over-bloated government.

Palin can now concentrate on exposing the false promises of the Obama Communists of a free ride on the backs of the so-called rich and working class taxpayers.

Sarah Palin understands what made America great and seems unyielding in her zeal and energy to secure this nation from our enemies without and within America. Palin can bring out the voters who sat out the last election.

Palin will continue to loved by Conservatives and hated of those who despise truth, justice and the American way.
Posted by Paul Huebl Crimefile News at 7/26/2009 08:20:00 PM

The Left sure is afraid of this women for some reason.I have never seen such an extensive smear campaign.