Yippies Vs. Chicago Cops, A 1968 Democratic Convention Rematch Is Brewing 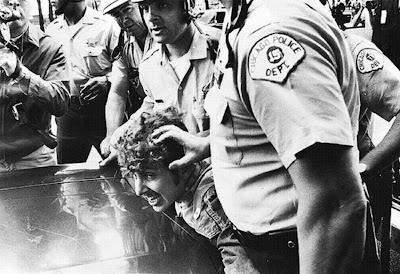 Chicago, IL—There is a planned reunion of Chicago cops at the FOP Hall this Friday. They are celebrating the 1968 Democratic National Convention. With a mandatory retirement age of 63 and a minimum age for appointment as police officers, any currently employed cops attending would have to be at least 61 years old.The majority by now are well into their 70's.

There are plenty of retired guys equipped with canes, walkers, diapers and oxygen bottles proudly wearing their “Medic Alert” bracelets that will show up.

I love the smell of tear gas on a balmy Chicago night!

1968 was a banner year for a country divided between traditional Americans and young Bolsheviks engaged in a failed Communist revolution. The hippie, Yippies and all of Chicago’s unwashed took on the cops and National Guard. It was no match since the cops beat back the freaks. Reporters, Mike Wallace and Dan Rather never looked better than they did with their skulls cracked by police batons!

The political fallout and litigation went on for years. For a lot of cops this was no party but a fight for survival. Many cops were hurt but the media ignored their injuries instead broadcasting images of Yippies with creatively enhanced with fake bandages and catsup. Sure there were plenty of well deserved hippies whose front teeth left deep impressions in those wooden police batons.

Now with the planned reunion the losers of this historical event want a rematch. There are plans by a bunch of old freeks to disrupt the reunion. I hope to see canes, crutches and other elder equipment breaking heads on Washington Blvd. The old coppers will win this one too!

I heard a interview with a chicago supervisor today Pat White i think name was and she said the cops had a police riot and that the yuppies were violated. who is this stupid bitch/

There's nothing worse than a bunch of losers, than sore losers!

The past isn't dead, it isn't even past. The conflicts of the 60s are still used to try to score ideological points, with no real attempt to understand the history. To get the history, you have to get the details right, which create the whole. Here's some things to get started on:

Most relevant to this discussion, an excerpt from Frank Kusch's book Battleground Chicago: The Police and the 1968 Democratic National Convention the only book on Chicago '68 that gives voice to the officers on the street.

And see an excerpt from No One Was Killed: The Democratic National Convention, August 1968 by John Schultz, which goes a ways toward dispelling the idea that the actions of protesters were guided by the so-called leaders of the national groups that came to Chicago.

There is no excuse but prejudice for failing to understand this history better.

Anonymous said...
I heard a interview with a chicago supervisor today Pat White i think name was and she said the cops had a police riot and that the yuppies were violated. who is this stupid bitch/

I think you are refering to Pat Hill. She spent her police career, abusing the medical, suing other cops for perceived slights, and being a racial agitator. She is the head of a group called african-american police league or something similar.

Total piece-of-crap! She brought more shame than honor to the uniform.

I can just see these old coppers charging the old hippies and Yippies with their power chairs and scooters while slinging dirty diapers at them. Yahoo!