What’s Going on At The Criminal Court In Chicago? 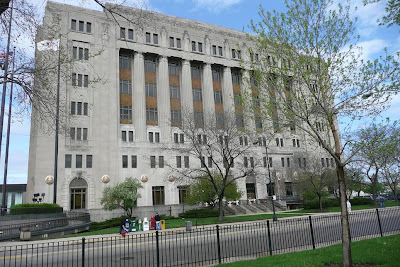 Chicago, IL—Yesterday there was a young Chicago police recruit accompanied by his father a 40 year plus, honorably retired cop that were visiting the court at 2600 S. California Avenue.

The young recruit suffered a serious injury on the job and has been off work on duty disability. The FOP issued the lad a duty disability star as has been their normal practice and he had his valid departmental ID card. When the lad displayed his credentials at the door with his father, the court’s security boss got involved, screaming at the recruit and his father in the foulest of language.

Without lawful authority, probable cause or any rational reason Deputy Chief Sheriff Charles R. Bowen confiscated the FOP star from the recruit. The recruit was treated as a criminal or police impersonator by Bowen.

There was no crime, no misconduct or the slightest disrespect on the part of the young recruit. Charles Bowen on the other hand was a bully, thief and behaved in a way that was nothing less than disgraceful.

While putting on his temper tantrum Bowen had threatened the recruit’s father with arrest and repeatedly dropped the F-Bomb so everyone in the entire court could hear.

I’m trying to figure the reason for Bowen’s unleashed rage and threatening behavior and can only come up with racial hatred. Bowen is Black and the recruit and his father are White.

Sheriff Tom Dart and Presiding Criminal Court Judge Paul Biebel need to apply a shock collar and muzzle to their hateful courthouse attack dog. There is a problem here since Bowen has serious South Side political clout and this patronage hack will never face discipline.
Posted by Paul Huebl Crimefile News at 6/24/2009 03:23:00 PM

Bowen has a history of abusing people he works with and people just going into the court houre. He needs to be medicated.

I had a similar experience in Bridgeview. I put my wallet containing my "retired" star thru the metal detector. The bailif examined the star at length and even went thru the id cards in the wallet. I didn't make an issue of it because I had someplace I had to be.

Bowen has a history of abusing people. He is a Stroger hanger on and feels he can't be moved. People who work in the building are afraid of him.
He is known for serious outbursts and foul lang!
Without his clout he would be drying cars at the blue star car wash on Madison ave.

Get him on camera and post the son-of-a-bitch. Or turn it over to Fox News. I am sure he is not smart enough to watch his mouth, and the media loves stories like that.

Bowen is on the secret clout list for the city of chicago.enough said.When he retired from cpd, he got a job as a Daley Liason.

I'm sure Bowen would have red hot pee if they bothered to test him.

Since when do recruits get duty disability?

Recruits get duty disability when they are disabled after being injured on duty. It’s the law, not rocket science.

Tom Dart will never have the balls to control Bowen.

I had a run in with this fool in late April. He can't control his temper or foul mouth.

I worked with Charlie in 018 back in the early 90's IIRC. He was a poser then and he is a poser now. Next time I see him I will challenge him and see what he does. A could use a few million.lol.

charlie is nice man. got many poor people jobs . but he got a bad temper. cant help himself.