The Two Most Divisive Presidents 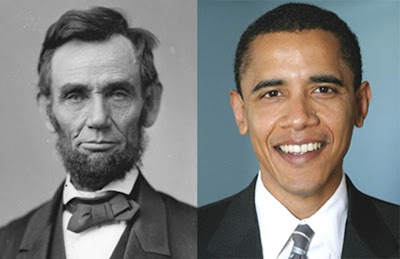 Washington, DC—The losers of wars don’t write the history books. For 150 years Americans have swallowed the crap about Abe Lincoln being one of the greatest Presidents ever.

Lincoln was the greatest divider as he brought the plague of Civil War to our nation. Brother against brother the slaughter of Americans was beyond staggering. At least 618,000 Americans died in the Civil War, and some experts say the toll reached 700,000. The number that is most often quoted is 620,000. At any rate, these casualties exceed the nation's loss in all its other wars, from the Revolution through Vietnam.

Lincoln was a world class tyrant that forced his ideology down the throats of Americans who were then conscripted into slavery through the new income tax created just to fund the celebration of carnage. Lincoln’s assassination was much too little, and far too late. History was quickly revised to make thas monster seem like a hero.

Now we have a ruthless Communist in power seizing businesses, ending competition and excellence in business. Barack Obama is placing a heavy yoke of slavery around the necks of every man, woman and child in America to achieve his Marxist dreams.

I have never heard so many Americans dare say out loud they wanted to see this President dead like I’ve heard in the last five months. I won’t weep after hearing a news bulletin that Obama was struck down by assassins.

If Obama is allowed to continue on with his un-American campaign it’s only a matter of time before we have another Civil War as a result. Obama shares Lincoln’s reputation as a divider.
Posted by Paul Huebl Crimefile News at 6/16/2009 07:29:00 AM

It makes you wonder why half the county is buying weapons and ammo in unprecedented quantities.This didnt even occur during the Clinton era.Hhhmmmm........

If Obama gets whacked, we'll have civil disturbances that will make the 1960's look like a cakewalk.

I don't like Obama's policies either, but if he's assassinated, cities will burn.

You have to be nuts, or extremely well-protected, to think greasing the Kenyan-In Chief could be anything less than a disaster for America. Speaking only of my situation, we'd have maybe 20 minutes to clear out before the mobs came to burn us out.

There is no doubt in my mind that if Obama is killed that we will have war on the streets of every American city. We will have that no matter what.

This administration can’t continue in its current direction without a civil war anyway. This Marxist porperty and power grab will wake the sleeping giant.

The United States of America as we knew it is fading fast along with the Bill of Rights. I wish I was somehow wrong.

Paul, this is off topic but I just wanted you to know that John Farrell's retirement party is Jun 19th.

I’d love to attend Farrell’s retirement party but I won’t arrive in Chicago until a couple of days later. Farrell should have been Superintendent.

So many guns are being sold since the chocolate jesus took power,that there is a shortage of 4473s.