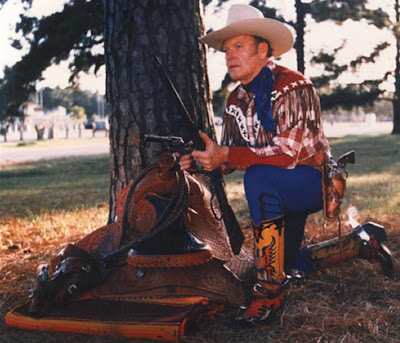 For as long as I have been going to the larger gun shows I have know an old cowboy, showman, master of card tricks, gun slinger, straight shooter and spokesperson, Joe Bowman. Bowman knew how to handle his trademark six-guns.

Bowman was a one man exhibit who in recent years traveled with the Strum Ruger Gun Company wherever they would display their wares at various gun and firearms trade shows throughout the world.

Bowman would appear at the functions along with his cowgirl wife, Betty and dazzle everyone with his impromptu shows.

Bowman had just completed his last gig at the End of Trail Show in New Mexico. This morning Betty Bowman woke up in a hotel they stopped at on their way to their Houston, TX home. Betty was unable to wake her husband who apparently died peacefully in his sleep. Bowman was 84.

I shot this video of Joe at the May 2009 NRA Convention in Phoenix, AZ.

I'm so sorry about the passing of your friend Joe. I could tell from your video that he held a very special place in your heart. I posted a song for you on FB. Please accept my condolences.

Rest In Peace, Mr. Bowman and Godspeed.
Hugs Paul,
B

Dear Betty, I am truly going to miss Joe, But the Lord called him home to do some shows in Heaven, and to do some card tricks for the Angels. He was Truly a Great
Inspiration for me, and Always a Texas Gentelman, Who was Lucky enough to have a wonderful Partner like You, to share his Magnificent Life with.I hope His Wings won't interfere with his rope tricks. Love Always, Marc Goldberg, his "double dealing buddy" in Las Vegas. GOD BLESS YOU BOTH.

Dear Betty, I was So sorry to hear about Joe's passing, but the LORD needed Joe to do some shows in Heaven, and some card tricks for the Angels too. He will Always be remembered by me as a Texas Gentelman, who was Blessed to have had such a Wonderful Partner like You, to share his life with. I can only hope that his Wings won't interfere with his rope tricks. May GOD Bless You Both. Your "Double Dealing Buddy" in Las Vegas, Marc Goldberg

Dear Betty, It is hard to believe I was just talking to Joe and you at EOT. He was a great man and a great American. Like Roy and Gene he showed as right from wrong and to act when we saw wrong. I think he is riding with all the old cowboys now.
My condolances to you and all the family.