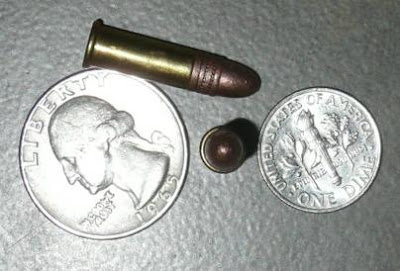 Washington, DC—That 88 year-old, hate filled, convicted felon and ex-convict, James Von Brunn killed that security guard with a simple .22 rifle. Of course the killer found himself gunned down by another armed civilian guard at the scene.

Getting information about the involved weapon was difficult because it was one that’s nearly below the gun-hater’s radar screen.

Laws that were broken by gunmen.
1. DC is a Gun Free Zone barring carrying or mere possession of firearms.
2. The ex-con Gunman was prohibited from possession of any firearm.
3. Laws against assault and murder were also firmly in place.
4. Hate crimes Laws.

This is yet another example of how gun laws have zero impact on criminals. The crime was interrupted by armed civilian security guards in a land where armed guards are very rare.
Posted by Paul Huebl Crimefile News at 6/12/2009 09:43:00 AM

Hello Paul,
You and I met at the Chicago 2nd Amendment Rally about a year ago. I've been following your blog ever since. Thank you for clearly pointing out that this murderer acted outside the scope of the law, whereas many fine citizens own firearms responsibly.

The moment we stop spouting that message, we will lose our rights.

Specifically, it was Winchester Model 6, .22 caliber rifle made between 1908 annd 1928. No records of purchase were made then and the gun is grandfathered into ownership laws.

If you can shoot well with it any caliber is deadly. This is why you should carry what you shoot best with.