Obama Wants to Move this Guy to Your Neighborhood! 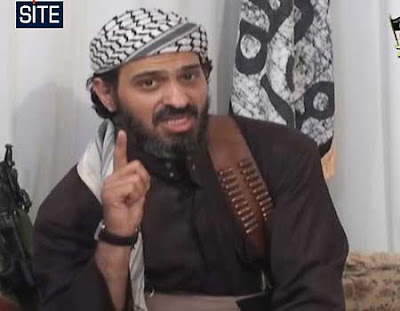 Washington, DC--Chairman Barack Obama ordered Gitmo closed and has planned releasing the Muslim terrorists inside the United States. The plan was to set these killers up with welfare benefits and let them live happily ever after as our new next door neighbors.

The twisted religious route these killers have set for them to get to Heaven is by killing innocent American men, women and children.

This former Gitmo guest, Said Ali al-Shihri, who was released from the U.S. detention center in Guantanamo Bay, Cuba.is believed to have senselessly slaughtered nine people including student nurses and children in Yemen.

The nine foreigners — four German adults, three small German children, a British man and a South Korean woman — were abducted on June 12 after they ventured outside the city of Saada without their required police escorts, according to a spokesman from the Yemeni Embassy in Washington. Days later the bodies of Rita Stumpp and Anita Gruenwald, German nurses in training, and Eom Young-sun of South Korea were found shot execution style in the Noshour Valley in the province of Saada, an area known to be a hotbed of Al Qaeda activity.

I suggest that Obama should let his Gitmo friends stay in the Whitehouse or better yet we lock up Obama at Gitmo too.
Posted by Paul Huebl Crimefile News at 6/20/2009 08:07:00 PM

These terrorists need not fear the local police.

The chocolate jesus is bent on destroying America.To those that took the oath,"against all all threats foreign and domestic".

This guy won't last in my neighborhood!