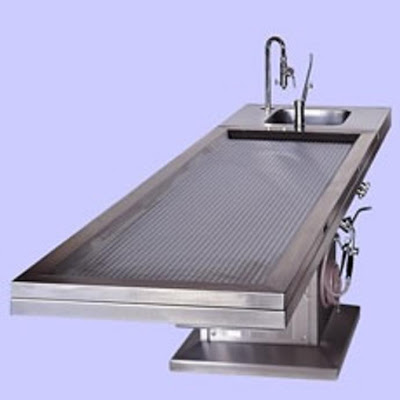 Los Angeles, CA—King of Pop, Michael Jackson’s immediate family members obtained control over the pop star’s remains once the Coroner released them. The Jackson family is exercising their absolute to hire their own forensic pathologist to second guess the autopsy done yesterday.

The original autopsy would have involved a huge Y shaped incision to the torso enabling the removal and examination of every organ. The organs themselves are removed, weighed, and sections of them are sliced away for microscopic and toxicological examination.

The scull is opened and the brain is removed and sectioned as are the other organs. All of the organs including the brain are finally tossed into a large plastic bag. When the examination is completed the bag of sectioned organs is placed inside the torso cavity. The body is sewn shut with butcher’s string. The skull is reassembled and a large wad of cotton replaces the brain.

The second autopsy would most likely be conducted at the funeral home handling Jackson’s internment services. The second autopsy requires the body being reopened and the plastic bag is opened so new organ samples can be sectioned and saved for the same examinations as the first examination. The tissue samples will be removed to a proper laboratory. Generally there is no need to reopen the skull.

The body is closed again as in the first examination. Now the mortuary will prepare the body for normal embalming and viewing.

I suspect that there exists a video tape of one or both autopsies because of the importance of the findings. There will be lots of photographs at the least.

I don’t expect there to be any dispute between examiners as to manner and cause of death. Hopefully this will put most or all of the conspiracy theories to bed and Jacko won’t be regularly sighted walking the streets of Las Vegas like poor old Elvis.
Posted by Paul Huebl Crimefile News at 6/27/2009 06:44:00 PM

MJ got his fame for singing like a girl and dancing. I am fifty, completly passed me by.

Did he encourage teenage pregnancies? I do not know. The family used him.

The joke I like is how many underage girls get pregnant listening to Disney Radio?

I have never seen a family not get the results they paid for in a second autopsy. Those stories are like something from "The Onion".

Crime File Stated, "I don’t expect there to be any dispute between examiners as to manner and cause of death."

No there probably won't be any dispute now because there are two examinations and one should verify the other. But what if the Jackson family had just left the FINAL DECISION to the County of Los Angeles Coroner.

Lawyers and doctors in the Phil Spector trials thought the LA County Coroner had not done an excellent job in determining how Lana Clarkson died, as the Coroner said murder instead of suicide. And also did not conduct a suicide investigation.

PS Thanks for the graphic account of Michael Jackson's autopsy. A real thriller...but necessary for people who are able to stare death in the face.