LAPD Detective Stephanie Lazarus Deserves The Benefit Of The Doubt 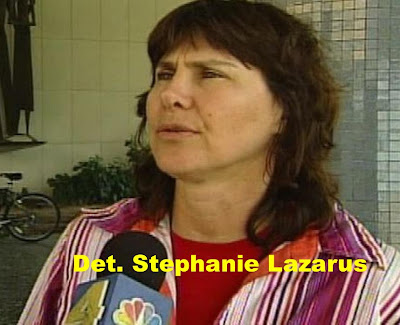 Los Angeles, CA—I’m dumbfounded by the arrest of LAPD Detective Stephanie Lazarus for murdering her former boyfriend’s wife, Sherri Rae Rasmussen, 29. Rasmussen was both beaten and shot to death in 1986.

There is apparently nothing in the background of Lazarus that would suggest this kind of violence. Apparently there are no witnesses to explain Rasmussen’s killing.

The big question I have is just how DNA material transferred from Lazarus to Sherri Rae Rasmussen at the time of her death. Since it’s conceivable that Lazarus may have been legitimately in the home that Rasmussen shared with her husband the presence of DNA material may not be sinister.

If the DNA material is blood transferred during a fight in which Lazarus was injured that led to the killing then that’s somewhat persuasive that Lazarus was involved.

If we are talking about a physical fight between the women we cannot discount a defense of self-defense. If it were self-defense then the killing was justified. I’m sure the public, police and prosecutors would act with disdain if Lazarus failed to report the event to police.

The fact is there are no laws that require the reporting of a justifiable homicide. Lazarus has an absolute right not to ever say a word about that to anyone.

If Lazarus was involved and simply failed to report the event she deserves no punishment.

I can’t help but notice that the LAPD arrested Lazarus on a Friday so she could be kept away from the court and a bail bond hearing for the weekend. This does not appear to be a capital case so perhaps reasonable bail can be set.

The case will be submitted to the District Attorney who may have a different view than the LAPD.

Lazarus, her LAPD officer husband and child have a nightmare before them. This will require significant financial assets to obtain the legal, investigative and forensic expert services needed to obtain a fair day in court.

I can only hope that there is a fair disposition of this remarkable case. I will be watching it closely.

Stephanie Lazarus is expected to make her first court appearance on Tuesday, June 9, 2009 @8:30 AM in Division 30 located at 210 Temple Street, Los Angeles.

THANK YOU!!!!! I AGREE! IT'S ABOUT TIME SOMEONE GIVE HER THE BENEFIT OF THE DOUBT

I worked with Stephanie said...

I hope she lawyered up immediately.
I hope she keeps off the jail phones.

I hope she talks to NO ONE, including her friends and family.
She needs to retire, and as you stated fight this with everything she's got.
Hopefully shell get a good defense team and not like an attorney like Garrigos whom in my opinion loves the media too much.
http://hi-caliber.blogspot.com/2009/06/lapd-det-stephanie-lazarus-arrested-for.html

Paul if (if) she's guilty of murder, I support a plea bargain of manslaughter with no jail time.

After all she's already been rehabilitated and is no threat to society.

I suspect that it is way too early for a guilty plea to any crime or any kind of a conviction. Let’s take the time to see if there is a provable case of any kind against Lazarus.

After reading the book Homicide Special LAPDs dicks are just as bad as anywhere else.

Some of LAPDs interview techniques can be read vie above link.

They also use the REID technique which is very biased and manipulation.
http://hi-caliber.blogspot.com/2008/06/lapds-confrontation-interrogation.html

If she's guilty she's guilty, if she's not she's not! Would you be saying this if were your family member killed ? Manslaughter... no jail time.. ? Please...!

This notion of killing someone in self-defense with no 'need' to report the killing is obsurd!

If I kill an intruder in my home 'truly in self-defense' does this mean that I can throw the body outside and not admit to anything, or offer any help in the solution of this 'who done it', because I know that it was self-defense.

This poster knows that Stephanie Lazarus' department (2 officers) has in the past, 'operated outside the scope and realm of the law'.

Sometimes bad people wear badges. No amount of outward 'actions and appearances', or so-called 'rehabilitations' justifies the coddling of this defendant.

At the time of this crime, this woman wore a badge, and had sworn to uphold the law.

In America nobody has to explain anything to the police ever. A judge could order you to testify only if you’re given immunity from prosecution first. This is under the Fifth Amendment in our Bill of Rights. That is the law of the land.

Disposing of a corpse may be considered evidence tampering. That would be a minor offense compared to murder.

This cop bit the victim during the fight. That's where the DNA comes in. The victim's family told police to check out this cop because she had threatened victim. Police refused to even consider this and told victims family that they watched too much TV. This cop killed the victim over a man and got away with it because she was a cop. What else has this "cop" done over the years? Can't doubt DNA evidence, unless your're an OJ juror!

Or, and this is 3 years later because I stumbled upon this page after watching a documentary, the evidence was tampered with. Whole damn thing looks like a sloppy frame job to me.

...and now it's 3 years later, and she has 27 yrs to think about the fact that, as it appears..she was framed.

...and now it's 3 years later, and she has 27 yrs to think about the fact that, as it appears..she was framed.

I personally wanted to do her criminal defense investigation. Investigating this in a post conviction posture is more difficult because it takes much more new evidence to win a new trial. I'd do it now if I was retained. I can't promise more than hope...

Can SL get a new trial? just asking

I know I could have helped her during the trial. Getting a new trial requires better evidence than what can simply bring an acquittal. I would have taken an entirely different direction at the trial. I think taking a look now may be helpful'. She's far better off with me than cop friends. Cops don't really understand defense investigations because they don't do them. 310-420-9450.

Had SL said during interview that she went over to the house to discuss things then things got out of control they got into a fight she panic or lost it or something like that instead of claiming the DNA was not her. I don't know but considering the evidences against her. perhap by admitting to some guilt maybe the charge could have been less perhaps.

On the contrary! Had she simply said, I want a lawyer." Instead of answering questions her case would have been much more difficult for prosecutors. I will never let some cop put me in an interrogation room. Book me or let me go... That goes triple if I'm innocent and have nothing to hide!

For sure the interrogation damaged her case tremendously but as its mention no one witness the crime, she did not confess during question dna is hard to refute . I mean after the facts and knowing it , couldn't she come up with some self defence stragedy anything to get a lesser charge .defence are usually plea bargained if they decide to come forward.

Self Defense is not a crime and that claim in court could have saved her freedom but maybe not her job.

In other word SL did have a chance to claim self defence. biting the arm proves there was a struggle , that is self defence already but if she decide to protect her job rather than her freedom I just can't imagine