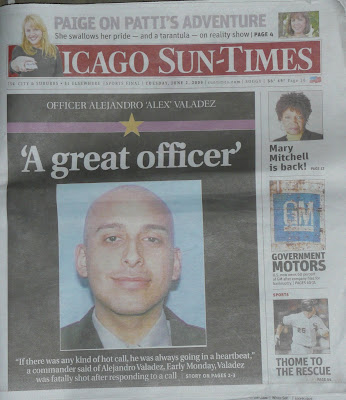 Chicago, IL—While I was a guest on the Geoff Pinkus WIND Radio Show, we heard a sickening story breaking that a young 7th District tactical officer, Alejandro Valdez, 27 was shot in the head as he was investigating a shots fired call on South Hermitage Avenue. The officer was taken off life support after a 14-hour battle to save his life failed.

The young officer was only three years into his career and earned 22 Honorable Mentions and a Department Commendation. He was engaged to another officer and was about to start a family. The officer was ambushed by cowardly criminals that opened fire in a drive-by shooting.

Two Gangster Disciple hood rats are in custody. They are both violent criminals and convicted felons. It looks like they are going to stand trial for a capitol murder charge. 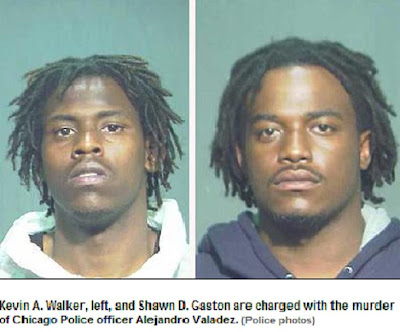 Chicago police officers need greater firepower than their service pistols now. Mayor Richard M. Daley has dragged his feet and does not give a rat’s ass about the men and women sworn to protect life and property in Chicago.

The problem is made much worse by severe under staffing of officers. That of course while the mayor and various politicians and political supporters have Chicago officers as personal bodyguards.

How many more officers must die before they have the right manpower and tools to protect themselves?


Here are pictures from the funeral borrowed from Renee at Intheloop.tv

Two convicted felons.... walking to streets... allowed to commit again and again. What is WRONG with our legal system??

This is so heartbreaking. God Bless this honorable young officer and God bless those who loved him. May he rest in peace.

Jonas, 58, of Centreville, appeared to have been shot once in the back of the head, said St. Clair County Coroner Rick Stone. Residents of the Ernest Smith Apartments in Centreville said Jonas was lying in the street and his maroon Impala police cruiser was parked in front of 4724 Tudor Ave. in the public housing project.

The shooting took place before 2 a.m. at the Ernest Smith Apartments at 47th Street and Piggott Avenue in Centreville.

That City gun ban sure does save lives.

Thanks for giving this horrible tragedy and the plight of the CPD some recognition Paul. Maybe, exposing the situation on the CPD will bring about some needed changes.

I’m sure you are aware of the 27 year old Chicago Policeman who was shot in the head at 60th & Hermitage early this morning. I have just learned that this afternoon Officer Valadez succumbed to his wounds and has died. I'm sure he is now in a much better place and safely in the arms of Jesus.

This fine young man was just out doing his job trying to protect the residents of your crime ridden neighborhood and had his life cut short by some evil monster. Take a look at the video that some of your parishioners posted on “YouTube” on Saturday:

YouTube - The police beat Tony Black down in Chicago.3GP http://www.youtube.com/watch?v=Gx7CuxYAMQw

Do you know who these mutts are?
Are they gangbangers, or Honor Roll students?
Are they just “misunderstood?”
Why no screaming?
Why no public outcry?
Why no demands for justice?
Why isn’t your face all over the news condemning this senseless act of violence?
Why aren’t you pleading for his killer to surrender to the Police?
Where’s Jesse?
Where’s Rev. Wright?
Where are all the other Englewood Reverends?
Where is the Alderman?
Where is the Mayor?
Where’s all your “Peace Marchers?”
Where are the residents?
Do you feel his life was not as valuable as one of your gangbangers?
Will you blame his death on an inanimate piece of metal too, or the murdering savage that pulled the trigger?
Will you fly your flag at half staff, or upside down?
Where is the outrage?
The silence is deafening!
Where are you at Fr. Pfleger, where are you now?

In my opinion, you are a disgrace to the Catholic Church and I pray that the Devil holds a special place in Hell for you............that’s good and hot!

(Page 2 of 4)
Looks like I struck a nerve!
(PFLEGER’S RESPONSE)
In a message dated 6/1/2009 7:20:53 P.M. Central Daylight Time, pastorpfleger@ameritech.net writes:
Dear Mr. McMahon, perhaps your anger and hate don’t allow you to hear, but for your information The shooting of this officer which resulted in his death was spoken about by me this morning where I begged people with information to come forward we have also offered to post a reward to catch his killers. Your attitude being what it is I, it is probally good that you are retired.

Once again, where are you now? I’ve watched every major news channel yesterday and today, and haven’t seen or heard as much as a whisper out of you or your merry band of political zealots. Instead, stories about Police brutality and wrong doings took center stage to deliberately overshadow the murder of this young Policeman. Who exactly did you beg for information from?.......the “Hermitage Block Club?” You always seem to manage to get top billing when you’re stirring up controversy. And I’ll bet your community members were tripping over one another to donate reward money to help “catch his killers,” because I know how eager they always are to help out the Police!

Ironically, Englewood is graced with having some of the most dedicated men and women that the City of Chicago has to offer protecting their lives around the clock. I spent over 20 years working at a firehouse in St. Sabina Parish and was involved with, or witness to an uncountable number of lives that were saved in Englewood due to the tireless efforts of the committed members of the Police and Fire Departments. And through it all, I have never once seen any gestures of kindness, or heard any words of praise or gratitude out of you or your media hungry cohorts, only complaints and vicious attacks on those that serve your community. But as you indicated, it’s probably all my “anger and hate” that has made me deaf and blind to these accolades, or maybe it’s just the truth.

(MY RESPONSE)
From: McMahon351@aol.com
Sent: Tuesday, June 02, 2009 10:09 PM
To: pastorpfleger@ameritech.net
Subject: Re: Where is everyone?
Be my guest. You can send it to the Mayor, the Governor and the President too if you'd like. Do you think I'm afraid of a little "piss ant" like you? Are you so demented that you think you're going to get me in trouble for telling the truth? Nobody with an ounce of sense has any respect for you anyhow.

Tact and Gang teams being filled by reverse seniority? I heard it's happening in some places and other places aren't letting people leave because there aren't any volunteers to fill in. What happened to the "Ceriale rule" - no plain clothes under 3 years? God forbid someone else gets killed who didn't have the time.

I knew Alex since he was 17. Alex always put 110% in to his work. I know first hand because he worked for me and worked with me side by side at ups. When he left the company it was a great loss, but when his soul left the earth it was a greater loss.

Alex I am sorry that this tragedy happened to you, your friends and family. May you rest in peace.

See, this is what I'm talking about. It sickened you, as it should, and now you're left defending this pos's right to Joel Brodsky's vigorous defense.

Sometimes, we all have to "bite the bullet" and admit when something is just plain wrong.

You've got to bite the bullet on this one, and realize that the lawyer that calls himself Joel is nothing but a media whore. Spewing on Chicago ABC 7 that the judge was correct in letting this garbage stay on the street, to later kill Officer Valadez, is an insult to all of us are filled with sadness over this young man's cold-blooded murder. If Joel wanted to hire you to help in his investigation, could you do it? I think not. But, you can't have it both ways.

However, if you can live with the idea that he deserves a vigorous defense, he was rightly left on the street, and his confession was anything but proper, so be it.

If we can’t protect this human waste’s Constitutional rights who will protect ours? Criminals are convicted and even sentenced to death despite a vigorous defense.