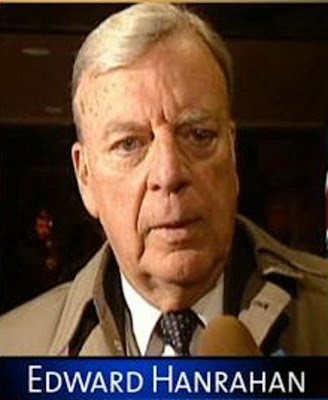 Hanaran is best known for leading that infamous Black Panther Raid one cold December morning in 1969. That's when two heavily armed ghetto rats, Fred Hampton and Mark Clark caught some serious lead when they attacked officers from the State’s Attorney’s police that were serving a search warrant.

Frankly I’ve danced, peed and spat on their graves ever since. Hampton and Clark advocated the murder of Chicago cops. They got just what they deserved.

Politics rules in Cook County and they Indicted Hanaran along with 14 of the raiders. The prosecution ended in 1972 without convictions and civil litigation went on for over two decades. The taxpayers ate it again.

Hanaran was also famous for the prosecution of the Friday Night Rapist, Robert Ellis. That case ended when a recent Supreme Court opinion prompted a motion by a young public defender, Ron Himel to invalidate a line up identifications made by the victims. Ellis was released and went back to kidnapping and rape until he selected the wrong victim.

Hanarahan had a verbal in chambers shouting match with Judge Louis B. Garippo telling him he’d be responsible for any future rapes committed by Ellis. That all fell on deaf ears and Ellis was released.

A pretty and delightful 25 year-old recruit policewoman, Ann Leybourne had been sworn in and armed days earlier. Ellis was on the prowl and kidnapped Leybourne at gunpoint. During her kidnapping, the young policewoman savagely fought back, shooting him once with her own gun and with three more rounds from his own weapon killing Ellis.

MY name is also Edward Hanrahan I am 32 years old and find it quite interesting that I share a name with such a man.