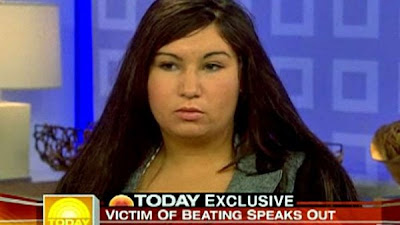 Sauk Village Park, IL—This quiet South Suburban town was the scene of a vile and brutal attack on a teen girl. The attackers also teen girls ganged up on the victim, Mercedes Michaels, 17, of South Chicago Heights beating her as she lay restrained on the ground while they used scissors to cut off her pretty and long hair.

Michaels seen on the Today Show is wearing hair extensions in the photo above to cover the scalping she received from the young thugs.

The crimes charged should also include armed robbery since they used a weapon to forcibly rob the victim of her hair. They also burned the victim with a cigarette lighter.

Four girls were arrested for this crime including, Sarah Kraft, 17, of Park Forest, and Marcelena Castillo, 17, of Steger. Two of the girls were not identified by authorities since they are juveniles 15 and 16 years-old.

As for the offenders here I’d hope to see them tried as adults and locked away from society for a minimum of five calendar years. Lower animals are never this cruel and we euthanize them for far less egregious conduct.

I wish I was the mother of those little "ladies"!!
Not only would they NOT be able to sit down or walk straight for a month... they wouldn't see the light of day until they turned 21!!!!!!!

This is a perfect example of how spoiled and undisciplined kids are today! Where are these kids parents?!?!? I hold them 110% responsible for the actions of their children. These kids have no decency or respect for anyone or anything!!

I hope they are prosecuted to the fullest extent of the law! They need to be made examples of, and a message should be sent to all, that this type of behavior will not be tolerated!

This is not only disgusting and extremely dangerous... IT IS DISGRACEFUL!!!

These evil little bitches should be ashamed of themselves. As for the beautiful girl they attacked, you are in my thoughts and prayers. May your successes be plentiful. Succes will be your best revenge.

I agree with the above posts. These girls better repent, and Mercedes is in my prayers as well.