Babe Reporter Under The Sheets With L.A. Mayor 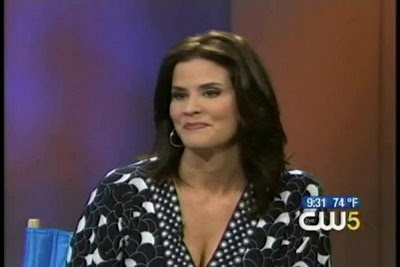 Los Angeles, CA—Lu Parker is one of the hotter babes in local television news. Parker is a reporter who works for a bankrupt TV station. KTLA has a cloudy future at best. Television news is in serious trouble in America. Viewers have fled to the Internet, Ipods and Xboxes forgoing news broadcasts.

Parker has taken up with Los Angeles Mayor Antonio Villaraigosa and has herself hit the media spotlight.

Two years ago, the mayor's marriage went South after word of his relationship with a Spanish-language journalist made a splash in L.A. news reports. Now with Parker being hooked up with Villaraigosa, again, questions are surfacing about ethics in journalism.

I may detest the Mayor’s politics but I don’t take issue against his flings with hot women. As for Parker she’d be better off with me instead of a total Bolshevik like the mayor. Parker has an absolute right to share her world with whoever she chooses. Great and lasting relationships are hard to find even for pretty people with high profiles.

Parker should enjoy her life and stay off of the political newsbeat. Parker can continue to front KTLA stories like this one and there should be no conflict of interest.

I'm a big Hetero guy but I will color my Betty too!! Viva El Mayor of Los Angeles!! He is a REAL man and not a freaking Metrosexual..I applaud the fact that he is getting a new model every 2 years!!!

Back in the 1990's,Chicago anchor Marion Brooks of WMAQ hooked up with indicted Atlanta Mayor Campbell while she was an anchor in Atlanta, Georgia.

What these women will do for a story!

Any man who could hook up with this babe, as well as the Spanish language channel hottie from a few years back has got big mojo. Lucky bastard!

She looks like a drag queen. Was she always a girl/