Want to Save Billions? Eliminate The Death Penalty. 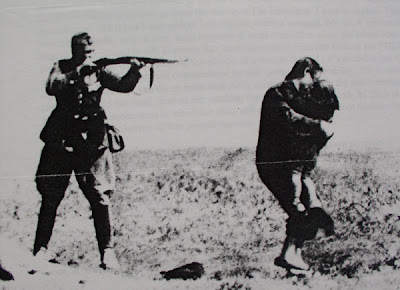 Hate murderers? Want to see them punished severely? You need to know a well kept secret. Death penalty cases are litigated, literally to death. The lawyers battle each case for no less than 20 or even 30 years on the average.

The court time, prosecution and defense with gaggles of expert witnesses are all paid by guess who? We are talking about millions of dollars per each condemned inmate.

If the killers are executed they are spared a miserable life of crappy living conditions and food to living with violent scummy fellow inmates. Many people chose suicide over a prison stay anyway.

Depending on the state of confinement it only costs $30 to $65 thousand a year to provide what it takes to keep killers in prison. It would save billions to end the death penalty. Then there are the multitudes of cases where cops and prosecutors get it wrong. Inmates freed after years of confinement because of solid new evidence sue and collect millions more from the taxpayers.

Aside from government getting it wrong and executing and innocent no government should have the power to execute their own citizens. Do we trust Barack Obama and his band of Marxists with that kind of raw power? Think about how Communist governments have killed endless millions of their own citizens.
Posted by Paul Huebl Crimefile News at 5/21/2009 08:06:00 AM

Hmmm ...
I'm pro-death penalty not because it is punishment but rather because it removes the possibility that the "animal" might someday be released back into public society.
And I would just feel wrong about flipping on the issue purely for economic reasons.
But if banning the death penalty would also be taking money away from lawyers, well, that'd be a *real* plus.
(Can we start telling lawyer jokes now?)
Seriously, though, you've raised some provocative issues.

Ed, you trust government much more than I do.
The whole idea here is that we have no victims of the animals you speak of. Instead we have a vigilant society that protects the young, female and feeble folks via the Second Amendment.

We need to kill more predators in the act of their deeds.
The death penalty should be reserved for traitors.

Ask your friend John Carroll about that!

I meant you could learn a bit about spending huge amounts of government money defending and appealing capital murder cases from John Carroll. Ask him!

Ed Skinner said ... I'm pro-death penalty not because it is punishment but rather because it removes the possibility that the "animal" might someday be released back into public society. ...

No 'animal' ever flew 500 miles to put a bomb under his wife's car, nor murdered a child to cover up his rape, nor put poison in her husband's coffee to get his insurance. It takes a human to do that. As for the DP 'protecting' us, it only 'protects' bad prosecutors from losing weak cases. Actual multiple murderers like Coral Watts or Gary Leon Ridgway all too often get life while those like Kenneth Foster, Troy Davis or the many innocents like Clarence Brandley get death based on extorted perjury. Who is protected by false convictions?

Crimefile said: The death penalty should be reserved for traitors. ...

I'd like to see it being reserved for crooked politicians. You think that will ever be passed by Congress?

@crimefile... tell that to the families of murder victims, i.e. at the hands of serial killers, mass murderers, etc...

Like Ed states, the Death Penalty (DP) is not a deterrent, as NO law prevents anything. Laws are mostly reactionary due to not enough law enforcement personnel, prison-space and smooth/efficient judiciaries to enforce and oversee. Even if there were, would anyone want a cop on every single street corner?

The DP does however have the distinct flavor of FINALITY. The DP should NEVER be used in cases of circumstantial evidence convictions... The DP should be employed, once there is 100% positive physical-proof of the said crime(s) in order to reduce wrongful employment of the DP.