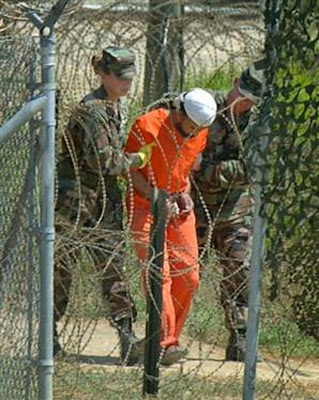 Washington, DC—Barack Obama’s latest wet dream is to release the Muslim enemy combatants onto American soil. I suspect that I’m not alone in my concerns for the safety of Americans if this insane policy is ever enacted. So far even the Democrats in Congress are smart enough to know that approving this policy would end their political careers.

Imagine if Obama told the public of his plans to do this during the campaign. He would be anywhere at all other than in the Whitehouse.

During conventional wars soldiers are usually conscripted and are normally peace loving productive people. Had we released Japanese and German POWs because they had nowhere to live it would have had minimal risk. They were after all somewhat civilized.

This case is very different, the Gitmo detainees are willing suicidal warriors fighting a religious war and view killing Americans as a sure way to Heaven. The danger of releasing these fanatical killers would be more menacing than letting out every inhabitant of every death row in every American prison. Even Charles Manson would in fact be far less dangerous to release on America's streets.

Personally I’d feel a duty to take prophylactic measures and simply assonate any Gitmo detainees released near me. To not take such extreme measures would all but guarantee a jihad fueled bloodbath against my fellow Americans.

Any American politicians involved in this deserve to be hanged for treason.
Posted by Paul Huebl Crimefile News at 5/04/2009 01:58:00 PM

No habeus corpus or bill of rights. Not for foreign terrorists and not for illegals.

Here's what I had to say about it, to CNN.