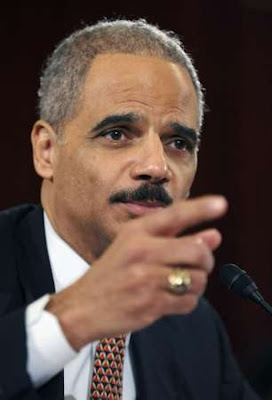 Washington, DC—The Barack Obama Regime’s Chief Inquisitor Eric H. Holder Jr. will begin their Star Chamber proceedings. The intent is to punish those former officials and lawyers that advised or directed CIA and military folks that responded to safety concerns of every American after the September 11 Attack on America.

After that attack and murder of thousands of Americans, Americans demanded Dirty Harry style efforts to bring those responsible to justice. We got what we asked for but now the Marxists in lockstep with Barack Obama think our intelligence efforts should have been kind and gentle. Holder will persecute anyone he can.

I hope the people involved are smart enough to recite four simple words to Holder’s Gestapo agents, “I want a lawyer!”

Agents of the FBI and lawyers employed by the Justice Department need to follow their oaths and reject any aspect of this nefarious duty. Each and every officer or government agent conducting this witch hunt deserves to be treated like traitors that they may face punishment for Treason for conduct under Holder’s command.

Any American selected for a Grand Jury,Petit or Trial Jury will remember their duty to protect fellow Americans from rogue government agents. Any juror that supports convicting Americans for protecting fellow Americans deserves a beating or worse from their neighbors.

Yes folks, this is yet another step taken by the Obama Administration to ignite a Civil War. Death to Communists and Traitors!
Posted by Paul Huebl Crimefile News at 4/22/2009 11:13:00 AM

One of Judge Jay S Bybee's decisions chimes in unison with Torture Memos that he signed, because Bybee's writing's impact is to give false justification and permit more torture by government agencies against their victims, and to close the door to any recourse for the victims.

Bybee decisions tend to side with the group - against the people. His unconscious chant, might be "Might Makes Right"

Bybee's decisions become the means to the end for torture to take place with impunity - whether that torture takes place on US soil against its own citizens -or abroad.