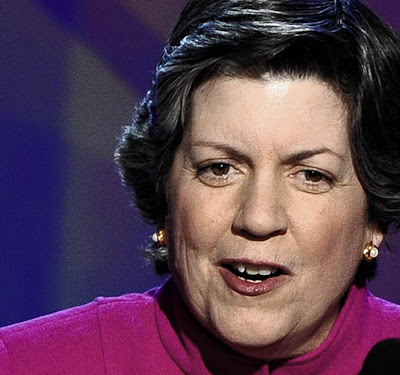 Washington, DC-- Homeland Security Secretary Janet Napolitano met with officials of the American Legion. Napolitano blamed the distribution of insulting and provoking report about veterans on her staffers. The report suggested our veterans were potential domestic terrorists sent out to law enforcement agencies throughout the country.

The fact is the report went out and was never recalled. The damage was not repaired and Napolitano passed the buck with lightening speed. Napolitano believes what was in that report or it would have never been published as a warning to every law enforcement agency in America.

The report was in every way consistent with the philosophy the former Arizona Governor.

The report backfired because too many of the cops that received and read it are themselves now branded as terrorists since they honorably served in the Armed Forces of The United States.

The Regime of Barack Obama has shown over the last 100 days that they hate the American form of government and has an obvious Marxist Agenda.

I don’t have a clue why Napolitano even bothered to talk to the American Legion since she and the Whitehouse are at a bloodless war against Americans and our Constitution. I expect that war will turn bloody very soon if the arrogant Obama Regime and their Congressional minions does not back off of their agenda.
Posted by Paul Huebl Crimefile News at 4/25/2009 07:25:00 AM

She is an incompetent fool. she must resign.

We law enfocrment becomes political, we must use caution.

In fairness Obama picking her was as stupid as Bush nomination Harriet Myers as the US Supreme Court Justice.