Knut Gets a Tasty Snack! 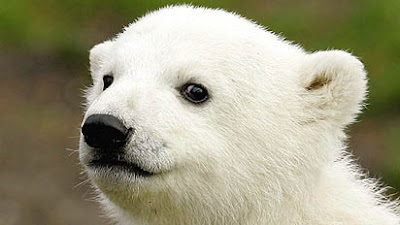 Berlin, Germany—Who could forget the cute cuddly little Polar bear cub named Knut. He was the star of the Berlin Zoo. He’s still a beautiful creature but he’s all grown now and does what the big bears do, eat people.

Yesterday some woman entered Knut’s cage where he and some pals were feeding. I guess he thought he was getting a special treat and began to munch on his visitor.

The woman must have been more than a little cuckoo. She was lucky to escape with her life. If I can get through life without Knut biting me on the butt I won’t feel deprived. Remember, when you go to the zoo Don’t Feed The Bears!

Lucky for the bear that woman had plenty of meat on her!

This lady was not in Knut's enclosure and Knut did not bite her. Knut lives in a separate enclosure by himself, and never interacts with the adult polar bears. Just don't want Knuti to get a bad reputation. In face, in December a deranged man got into Knuti's enclosure and Knuti did not bother him.

This lady did not jump into Knut’s enclosure. He lives in a separate enclosure by himself and never interacts with the adult polar bears. The adult polar bear did not “attack” her - it just wanted to play with her. If the bear had wanted to attack her, she’d be dead now.

She jumped in!!!
Unfortunately... the surgeons who treated her could not fix stupid!!! (although... I'll bet she DID learn not to do THAT again!)

Apparently now she is BI-Polar!!! LOL

Cute pic too, by the way.