Film Documentary, IN SEARCH OF THE SECOND AMENDMENT 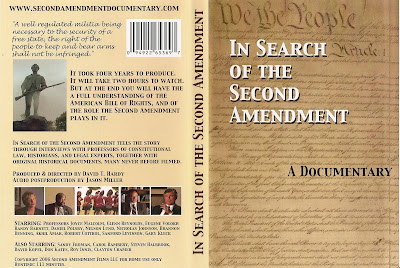 Tucson, AZ—I was lucky enough to get a DVD of legal scholar, David T. Hardy’s two-hour film about the origin and over two-hundred years of interpolation of American gun rights.

The film was copyrighted in 2006 before the Supreme Court ruled on the Heller case that held that the Second Amendment was an individual right rather than the right of state governments or a collective right.

Unless you have a love for law, the courts and lawyers explaining and arguing the law, don’t try watching this film alone at home. For me it was as good as it gets.

Hardy’s film took the scattered court rulings on gun rights juxtaposed to the located writings of the framers of our freedom and liberty.

For lawyers that defend Americans accused of weapons possession related charges this film is a must. The same is true of people who make laws.

Hardy has not failed to cover the ugly side of gun control that targeted African-Americans from the day slaves were freed until today.

This film is a must for those members of the Congressional Black Caucus in our Congress. Of course those people don’t seem to really care about the rights of their own people to stop genocide.

For those who like to defend gun rights this film will give you the tools to do that in debates, anytime and anywhere.