Drew Peterson Has A Right To Own A Gun 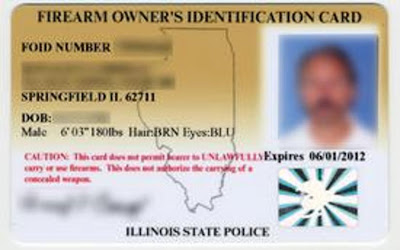 Bolingbrook, Il,-- For over a year now retired police sergeant, Drew Peterson has been called a lot of names including, suspect but never charged in connection with any mishaps involving his former wives.

The Illinois State Police have either revoked or cancelled Peterson’s Firearms Owner’s Identification Card without cause and so far, has refused to provide a hearing.

Since the action by the ISP two court decisions have come down, one from the US Supreme Court, District of Columbia v. Heller that held the right to keep and bear arms was an individual right. The question left open was whether the Second Amendment was only a protection against federal not state gun prohibitions.

The other case was decided just this week by the Uber-Liberal 9th Circuit Court of Appeals. This court ruled in Nordyke v. King that the states must honor Second Amendment rights under incorporation provided by the 14th Amendment. Now there is little doubt that many state gun laws and prohibitions will fall. The Nordyke case will never be appealed to the Supreme Court by either side.

In addition the FOID card is considered property and can’t be taken without due process of law under the Fifth Amendment of the US Constitution.

It’s pure and simple that the Illinois State Police have violated Drew Peterson’s Civil Rights under color of law.

Today Peterson’s lawyer Joel Brodsky sent a strong letter to the Illinois State Police demanding a hearing on the matter. Unless they either hold a hearing and show just cause or reinstate Peterson’s FOID card The next step will be the filing of an indefensible civil rights lawsuit against the Illinois State Police.
Posted by Paul Huebl Crimefile News at 4/23/2009 01:49:00 PM

Paul I would suggest Walter Maksym or perhaps even Alan Gura.

Maksym Has been working Chicago area gun cases for a while. You of course know Gura : )

Regarding several coments I have deleted...

I don't have a copy of Drew Peterson's FOID card. The one posted is just an example.

Yes I have a copy of the Brodsky letter and chose not to put it up for public view.

He's not under an order of protection as best I can tell nor has he been convicted of a felony or any kind of domestic related crime.

Since that's the case, by what authority has the ISP revoked his FOID? It has no authority, that's the problem. Personally I have my own suspicions regarding Peterson, but suspicions aren't enough in a nation of laws. I hope the IL NRA assists him and files suit.

I keep hearing this crap about the United States being the primary supplier of guns to the drug cartels in Mexico. To begin with most of those murderers are using fully automatic weapons. These types of weapons cannot be bought across the counter in the United States.
Further, the numbers being thrown around by the antigun nuts of 90% of the guns being used in Mexico coming from the US is also untrue and the people using this number know they are lying.
We know an assault weapon ban will only be a cosmetic, feel-good measure designed to make it harder for law-abiding citizens to buy firearms and ammo. It didn't stop any crime the first time, and it will not stop any crime now.
Remember, criminals do not obey gun laws. This is why we call them criminals. Also, as for the so-called gun-show loophole, this is a liberal fantasy to try to make uninformed citizens believe that gun laws do not have to be obeyed at gun shows. Licensed gun dealers have to do background checks on everybody they sell a gun to every time, everywhere, even at gun shows.
Closing the gun show loophole will only make it illegal for private citizens to transfer ownership of a gun to another private citizen, such as father to son.
Fewer than 0.7% of criminals ever get a gun at a gun show.
A Yale University study shows that for every 1% of private gun ownership, violent crime goes down 4%. When Australia banned weapons in 1996, armed robberies went up 73%. When England banned guns, muggings went up 40% and burglaries are now at a rate of 100% higher than the US.
Statistics show that 2,575 lives are saved for every one taken by a gun. By the way, in the first year of the Brady law, 2,356,376 background checks were done at a cost of $24 per check. Out of that number four prosecutions were launched. That's $14.1 million per prosecution; a real tangible affect on crime that turned out to be, NOT.
I would like to finish by asking you to remember one thing; 65 million legal gun owners in the United States didn't kill anyone yesterday and will not kill anyone today. However, one of those gun owners may well save your life someday.

I agree. I think he did it but until it's proven the ISP have no grounds to revoke his FOID.

I’m getting and promptly dumping a load of comments that are not based on a legal argument but an emotional one that suggests Peterson’s guilt. If those armchair detectives believe Peterson is guilty they should contact the Illinois State Police with their evidence.

I beg your pardon, I was referring to the revocation of his FOID. There is legal provision to do so when a person is judged a danger to themselves and/or others. What's wrong with that? Can you cite any blanket or political abuse of this rule?

Are you for real, “Judged a danger to themselves and/or others.”? Judged by whom?
If this was correct he’d be properly revoked on mental health grounds and there would be a commitment to an institution.

You simply want someone to have the arbitrary power to take away his rights on the whim of someone like you.

How about you lose your right to express your opinion because I think you’re a whack job?

You are un-American, go live where you belong in North Korea.