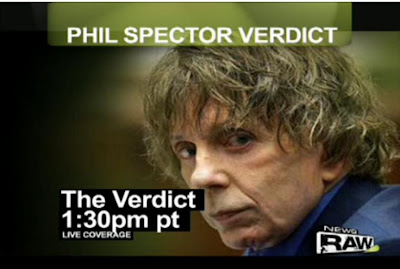 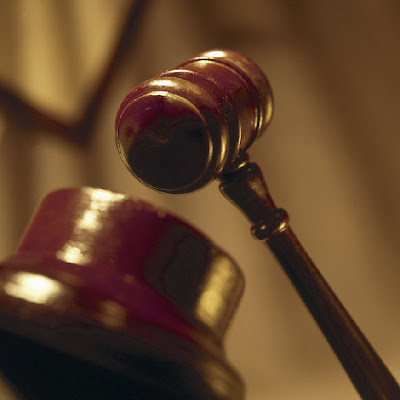 KNBC planed a live webcast but that effort failed. Here is the latest:

Los Angeles, CA—The six man, six woman jury in the Phil Spector case returned a Guilty verdict on the Second Degree Murder charge and a finding that he used a gun in the commission of a crime.

The prosecution has demanded that Spector be remanded to custody pending appeal. The defense has lots of motions to make now for an appeal bond and for a new trial.

Judge Larry Paul Fidler remanded Spector into custody until May 29, 2009 when he will be sentenced. Spector will be taken off to the L.A. County Jail where he will be held.

The feeling I keep getting when I try to keep tabs on this... This Time... is that much was done to keep this as low a profile case as possible. They surely mean to get this man for something. Anything. Lessor charges work in tandem with a wrongful death suit.

Thanks for the heads up Paul.

I just watched a documentary last night called Witch Hunt.
36 wrongful convictions for Child Molestation, from a single county, Kern County (Bakersfield, CA) where they were giving out hundreds of years per case. And that County still has the same Prosecutor!
Bottom line: I have no faith in California Justice.

Well, now a few moments after the verdict has been announced... I really have no confidence in this action called a trial. I followed it on Court TV the first time... and even argued on their forums with some in defense of a Not Guilty verdict. It was a scary thing to do... because when people get a blood lust for a Guilty Verdict... watch out!
They were absolutely scary over there.

The facts in this case did not support him being the shooter, beyond reasonable doubt. I remember that Lana's saliva was on his genitals. That kind of blew away the notion that Lana was a saint. She was a washed up actress who's career never got anywhere, and I think it all came to a head in Phil's mansion. She had made suicide threats prior, and I guess this jury had been kept from that little bit of knowledge. But in the Mansion, that she never got, it is not a far leap to see how a woman who aspired to have such success herself, and realizing it would never come, blowing her brains out. She did not want to be Phil's maid, or his prostitute... but to have a nice big house of her own. She had a tiny cabin she could barely pay for. Thus the "new job" at the House of Blues as a Hostess. Not a peer to the stars she knew but as a servant to them.

To hang this on Phil... is a crime in itself. A real miscarriage of Justice.

Judge Fidler, I watched you then on tv... and you don't deserve the title. A Judge is supposed to be the man in the middle, but your bias was so strongly in favor of the prosecution, it reeked. I pray I am never in your court.

Paul,
Thanks for all your work on this case you did keeping people informed of the other side of the story. I am sure Phil could have used your talents this time around.

Paul ur right gun control doesn’t work. Specter was an activist against guns rights. He was thee founder of john Lennon band aka the Beatles. They were left wing socialists all the way.

Therefore since specter HATED guns and he was a liberal…. He could not have possessed a gun that killed that bimbo.

Phil Spector is innocent. The jurors just looked at the totality. The didn't look at "beyond a reasonable doubt". Because there certainly was enough doubt to acquit Phil. The only jurors who were there during the press conference afterwards were the women. The male jurors didn't come out. When asked about the 5 women who testified against Phil, one of the women jurors kind of smiled and moved her eyes in such a way as if to say "Of course it was about the 5 women."
This jury was definitely confused but we're not giving up. We're going to fight on until he's free. The judge and the DA's office didn't have their thumb on the scales of justice, they had their whole foot.

12 morons have spoken. 12 idiots who couldn't be trusted to get your fast food order right if you wrote it down AND gave them exact change. Yeah, like that deserves any sort of respect. Too bad there isn't a way to drag those putzes off to prison for a few months and change their point of view. Maybe then they'd think instead of guessing.

Another case of improper jury instruction I bet.

Phil needed another pin-head engineer on the jury. Oh well, maybe next time.

I have had a few risque nights in my life, where you could say my saliva was left "somewhere". So if that saliva was left somewhere, and I didn't like where the "play" was going, i decided to leave, and my "companion" didn't like that idea and became violent with me, what chance do I have????

Just because she was down on her luck doesnt discount her as a human being, because he invented the wall of sound or whatever it was and basically helped the Beatles to their status doesnt make him a saint, it makes him an businessman with a vision.

I think she got spooked, didnt understand gun play, she had issues and then things went haywire................ She is dead, he "might" be going to jail, but he has a pattern of abuse, and no i don't buy the whole spurned girlfriend thing that is coming out now. Look at him, he isn't exactly normal. He is a bit of a freak, chalk it up to being an "artist", but Michael Jackson is an artist too............ Doesnt make him innocent........ Makes him a freak with alot of money.

Ok... end of my little two cents on this...
huggss Paul... We usually agree, on this we don't. Hope you had a great Easter.

Can you hand over solid proof that the jurors engaged in improper/unlawful activities during the trial?? I do hope if you have this..you will hand it over to Doron and Co.! I am hoping that the Appeal will be successful, because it won't involve Judge Fidler whom I personally feel had it in for Phil.

Also, how long will they keep Phil in the LA County Jail? Do you have an ID # of some sort/address so people who care about him can send him letters of support?
Thanks Mr. H.

Emotional and SICK People In The Jury may not be able to think too WELL or too logically.

There is doubt. There was not enough dust on him. He is much smaller than Lana unless she was allowing him to hold a gun in her mouth.

And why should anyone believe a person who is working illegally in this country and who stands to gain from his testimony which saves his own ass?

People would not ordinarily believe an illegal worker who can hardly speak English properly and who is possibly a biased witness because he always stood to gain a residency.

The jury may have jumped to conclusions because of how Lana ended up. A recent case posted by Paul shows it is possible for women to shoot themselves in the mouth and even more likely if they broke both their wrists at a Christmas party before meeting Phil Spector which Lana Clarkson did.