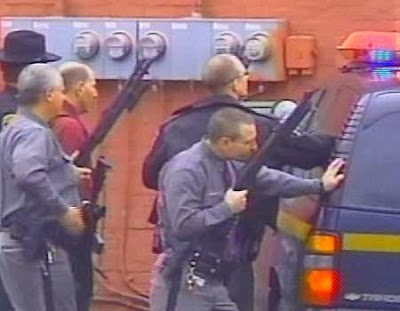 Binghamton, NY-Today an angry Vietnamese, armed predator trapped people in a public building and opened fire on them killing at least 12, and wounded numerous others.

As usual the shooter picked a soft target. It was in The Gun Free Zone of New York.

In the days to follow police will investigate and try to learn and tell us the motive for this mass killing. What they won’t dare say is the sad truth, that any armed and trained citizen could have stopped this event cold and saved lives.

As usual all the gun bans in New York only disarmed the law-abiding. The police were minutes away and did too little, too late. The gunman stopped himself with a self-inflicted gunshot wound before the police mustered the courage to approach him.

It’s not the duty of government to protect you and your family. That’s your job. Handing over your personal safety to a government agents via a 911 call is suicidal. That concept defies common sense. The police always arrive in time to remove the bodies and clean the mess. That’s just not good enough.

Americans have got to accept their duty for a common defense. The keeping and bearing of arms is our right. Training and quality firearms are available.

In our society there are criminals and unfortunate people who just can’t cope and are beyond the reach of help. No American need sacrifice family members or themselves to victimization. Gun bans are the problem, not a lack of them.

Visit msnbc.com for Breaking News, World News, and News about the Economy

"It’s not the duty of government to protect you and your family. That’s your job. Handing over your personal safety to a government agents via a 911 call is suicidal. That concept defies common sense. The police always arrive in time to remove the bodies and clean the mess. That’s just not good enough."

Very well said Paul. Thanks for your perspective.

Paul I agree with your post.
As I've said many times before; the citizens are always the first there.

Therefore they ARE the First Responders.
Additionally this idiot had multiple weapons on scene.

Therefore the ban on his rifle would not have helped.

So when then Mighty Wurlitzer (Frank Wisner usage) starts to crank up the usual disarm everyone line... keep bringing up how awful it is that nobody there had a gun to fight back with. The larger the number of people who get slain, without lawfully being able to fight back with equal force, the more it can be illustrated what gun prohibition laws do.
This crime, the gunman could take the lives of 13 people... and wounded some more... and the only injury he suffered was self inflicted! Now that's a crime! I'd hate to be one of those people who hid in the boiler room, and have to live the rest of my life knowing I did nothing to help those people who were killed, but run and hide.