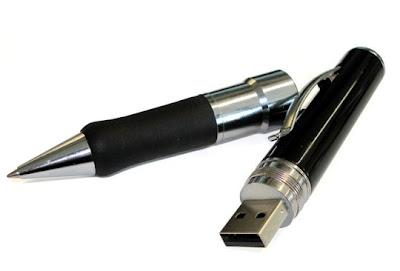 The picture is of a Spy Pen Camcorder available for sale.

Our jury system is far from perfect since people called to jury duty seem to have little problem with committing perjury. Far too often the people sitting on juries are having too much fun at the expense of justice.

There are those people who are addicted to trial watching who think the job of a juror is to aid the prosecution in convicting the accused. Some actually believe that the cops have secret evidence that can’t bring into a courtroom for technical reasons that are solid proof of guilt. It’s nearly impossible to uncover this kind of bias before a juror is seated.

The jury pool is always made up of retired people or simple civil servants with jobs that reward them for jury service with civic duty pay. Idle people are very prone to misconduct.

It would be far better to randomly draft jurors who come from the ranks of sought after professionals. They very people who always escape jury duty because their jobs are too demanding like physicians and corporation executives.

The last juror I’d ever want on my panel is the one wanting to be there. Nobody in their right mind should enjoy the inconvenience and role of a juror.

I’ve learned that on at least one jury hearing an attempted murder trial the majority on the panel had Google the defendant’s and so called, victim’s name. The jury continued to seek information outside the court on the Internet for the length of the trial. The defendant was acquitted perhaps because the disobedient jurors learned some information about the alleged victim that was held back from them. You see the star prosecution had an extensive criminal record and was an illegal alien. That information was published right here on my blog,

This story is just too good. A convicted defendant’s mother set out on her own to investigate juror misconduct and exposed a total scumbag with surreptitious tape recordings.

There are many states that allow for, one-party consent to that type of taping. In Michigan and California it’s a serious crime. Perhaps because the politicians in those states are afraid to be caught on tape committing extortion like a certain Illinois Governor was recently.

I’ve been convinced that the first and second jury in the Phil Spector Murder Trial has been surfing the internet trying to find out what gossip they may be missing about the people involved.

As for the mom that may well see the freedom of her wrongfully convicted son, you can learn about that here.


About that spy pen from the maker:

This pen hidden camera plus audio is a super small camera with a mini DVR to record all the action. It even writes like a normal pen. No drivers or outside power source needed. It will charge plugged into the wall and when it is plugged into the computer.

Perfect camera for "body worn" application. Just click it like you would any ball point pen to start recording. Can record for a full two hours on a single charge. Recordings can be later downloaded via high speed USB 2.0 to your PC for viewing and storing.

You can even use it as a thumb drive to move files from one computer to another. Will hold 4 Gigs of files.

Hey,I need one of those for roll call.