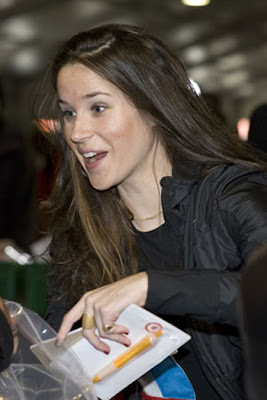 Wilmington, DE-Last month somebody claimed to have used a video camera to capture the Vice President Joe Biden's daughter, Ashley Biden snorting lines of white powder that was allegedly cocaine. That photographer is looking to peddle his prize for some big cash.

This scandal is being ignored by the dying Leftist media who are lockstep with the Barack Obama Administration. Remember the shabby media treatment VP candidate Sarah Palin received because her 17 year-old, unmarried daughter was knocked up? I thought the use of an illegal narcotic drug was much worse; it is after all a felony. Getting knocked up is no crime unless your mom is running for office against a Leftist sacred cow like Obama.

Perhaps it’s because their Bolshevik hero, Barack Obama describes his own cocaine use in his autobiography they are ignoring this criminal act.

Remember that picture of swimming champ Michael Phelps taking a hit from a marijuana bong? He was crucified over a soft drug but Ashley Biden get’s a free ride. I guess if you’re connected with the Obama Administration things do go better with coke!

An Update: So far no news agency has paid for or published this video. The lawyer assisting the seller has quit. Now it’s reported by Radar Online that the woman in the photo was someone that looked like Ashley Biden and that the allegation was false.

If this is the case I look for this creep to face federal charges for wire fraud for trying to scam the news agencies.
Posted by Paul Huebl Crimefile News at 3/30/2009 08:51:00 AM

Like my Wise Grandmother used to say:
"if you have a daughter of your own... you should NEVER be critical of someone else's."

I guess what goes around, comes around!

Have a little sympathy. Ashley Biden is the daughter of one of the biggest White sell-outs in history. It has got to be tough living with that shame.

Besides she's a hot-looking girl they get preferential treatment anyway.