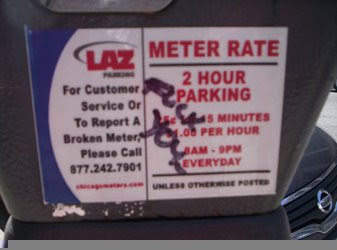 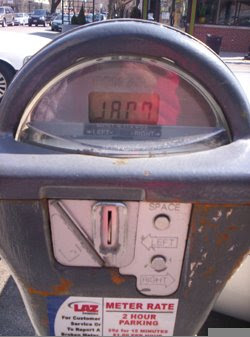 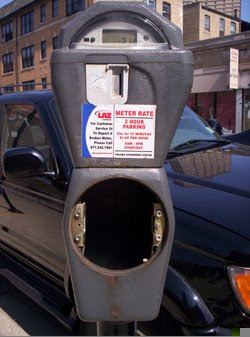 Businesses remaining in the city are victimized by every kind of tax scam that politicians can dream up. If potential customers and clients can’t drive or park anywhere business will be boarding up and moving somewhere else.

Recently the City of Chicago gave a 75 year contract to a private company in New York, LAZ to handle all of Chicago’s parking meters and collection. The rates doubled but the anger of Chicago’s citizens has gone through the roof.

Vandalized and inoperable meters are everywhere. Missing from the streets are the automobiles of people patronizing local businesses. A death blow has been dealt that spells disaster for Chicago.

I want to gleefully accept responsibility for some of the vandalism since I have encouraged it on this blog. Rather than show remorse I am overjoyed that spray paint, hammers, and crazy glue are being used to remedy this parking meter extortion conspiracy.

Rank and file Chicago cops I talked to have no plans to discover or arrest meter vandals, since they have lost all respect for the city government and they too are victimized by the parking scam.

We can only hope taxpayer rage will present itself at the polling places during the next city election. In the meantime I hope to see the company taking over the meters, LAZ file bankruptcy and vanish from Chicago. As for Chicago’s meter vandals I say, keep up the good work! Don't snitch on meter vandals!


There is a website that has explored the Chicago parking meter experience has lots of information and photos.

They've also floated the idea of automatic license plate scanners to catch and mail tickets to people driving without insurance.

That expired meter site is awful, just awful. Celebrating illegality like that. Not surprising, though. When the law loses the support of generally law-abiding citizens it doesn't last long; nor should it.

If the expired meter doesn't satisfy anyone's urge to condemn lawlessness like I do though, you can also check out what they do to speed cameras in the uk at http://www.speedcam.co.uk/gatso2.htm

They need another Jimmy Justice as seen in linked videos.

I live in far Northwest side neighborhood and the meter rates have quadrupled (sp?). Part of the problem is that the rates are so high and require so many quarters that the meters fill up rapidly and then jam. This leaves you without a functioning meter to park at and if you do anyway, you will be ticketed.

Power of the people.

I have heard several rumors, from credible people, that Daley's nephew recieved a very large commission for setting up this parking meter lease. If this is true, it could go down as the biggest Chicago scandal of all time. Can someone look into this?